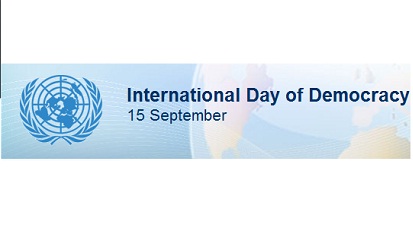 As the world‘s eager eyes are on Tunisia today, the country is conducting its presidential elections on 15 September with Tunisians heading since the morning toward polling stations to cast their votes.

The world is also celebrating another notable event as today further marks the International Day of Democracy. Every year, the day is traditionally marked with a distinct theme and this year. It is “Participation.”

On this day United Nations Secretary-General Antonio Guterres has asked all governments to recognise the right to active, substantive and meaningful participation.

Addressing a message on this occasion, he said marking this event” At heart, democracy is about people It is built on inclusion, equal treatment and participation, and it is a fundamental building block for peace, sustainable development and human rights”.

While congratulating all who “strive tirelessly to make this happen”, he added and reaffirmed that these values and goals “cannot be seen as tokens or lip service” but must rather be “real in people’s lives”.

“Yet the International Day of Democracy takes place at a time when trust is low and anxiety is high”, Mr Guterres proceeded. “People are frustrated by growing inequalities and unsettled by sweeping changes from globalization and technology”.

He concluded his message by saying “As we mark Democracy Day, I urge all Governments to respect the right to active, substantive and meaningful participation”.