Global inflation is at its highest level for decades, especially in advanced economies, with GDP growth already slowing sharply. This is called stagflation, but the severity of the stagflation varies across countries. The Euro area has always faced the challenge of being a monetary union without yet being a fiscal or banking union. As such, it lacks vital tools to deal effectively with shocks hitting the economy in an asymmetric manner across its member countries. Recent moves to allow mutual bond issuance are steps in the right direction, but may prove insufficient in the face of a shock as large the one to European energy supply from the war in Ukraine.
The European Central Bank (ECB) has the impossible task of setting a single monetary policy that is suitable for a diverse mix of countries in very different situations. This week, we take stock of the level of economic activity and prices in the Euro area’s four largest economies: Germany, France, Italy and Spain 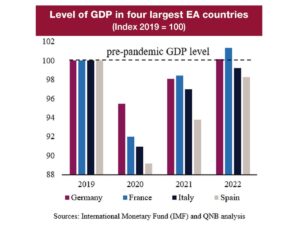 First, we look at economic activity as measured by GDP. According to the IMF’s April forecasts only France and Germany are expected to surpass their pre-pandemic (2019) level of economic activity in 2022 and neither by much (Chart 1). In contrast, Italy and Spain both saw much larger contractions in economic activity during the peak of the pandemic in 2020, and will not have reached their pre-pandemic level in 2022. The performance of all four countries is weak compared to that of the United States, but it is the divergence within the Euro area that matters for the ECB: the Italian and Spanish Economies are in a much weaker position in 2022 than either the French or Germany Economies.
Second, we consider the level of prices in the four economies in much the same way. What we see is that the level of prices has surged in Germany far more than in the other three countries (Chart 2). In fact, it is easy to see from the chart that the rate of increase in prices, i.e., what we normally call inflation, is broadly in line with the ECB’s 2% inflation target in France, Italy and Spain.

The conclusion of our analysis is therefore fairly simple. Neither the strength of the aggregate Euro area economy, nor the increase in prices (inflation) warrant a significant tightening in monetary policy.

Now, we should not ignore the fact that Europe is being hit by a massive energy supply shock, which we expect to both significantly weaken economic activity and push up on inflation relative to the IMF’s April forecasts. In this sense, Europe faces a much worse stagflationary shock than the US. This is because energy prices in Europe have risen by much more than in the US and European economies are large net-energy importers. This makes decision making at the ECB even more difficult and suggests a narrative for the ECB, which is that monetary policy for the Euro area needs to be much more supportive than in the US.

The ECB’s current forward guidance is that:

This outlook for ECB policy is indeed much more accommodative than the outlook for Fed policy, especially after its 75 basis point hike. Even with a gentle pace of tightening, bond spreads in periphery countries, e.g., Italy, Spain, Portugal and Greece, have come under pressure in recent weeks. This has prompted the ECB to announce that it will be flexible when re-investing proceeds from its asset purchase program to “preserve the functioning of the monetary policy transmission mechanism”. This effectively means to support weaker countries with higher debt levels by buying more of their debt.  Beyond this, the ECB has also mandated various subcommittees with the design of a new “anti-fragmentation instrument”. The exact parameters of such an instrument are still uncertain and yet to be defined.

In conclusion, our view is that we expect the Euro area to enter into a recession, and for inflation to fall sharply later this year. At the same time, the ECB will gradually tighten monetary policy whilst using asset purchases to support weaker countries in the periphery in an attempt to avoid a full-blown resurgence of the Euro area sovereign debt crisis.