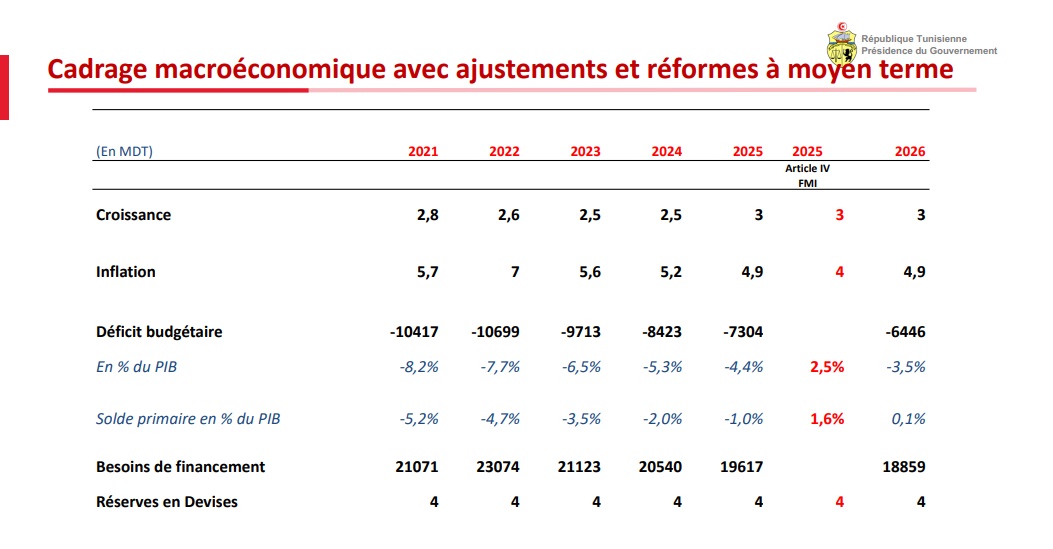 According to the details of a document drafted by the Presidency of the Government, called”Reform program for a way out of the crisis” and planned for the IMF for a new financing deal that we present the details exclusively, Tunisia’s financing necessities are worth 103 billion dinars ($ 35.9 billion) over the following five years, which transcends the country’s outstanding debts evaluated in the report recently published by the Ministry of Finance to 102.2 billion dinars.

The Tunisian authorities are attempting, as such, to get loans to manage expenses, pay wages and buy basic products such as energy, cereals and medicines, while the state’s domestic debts are pumping the banking sector capacities.

The figures disclosed by the document add to concerns that new debt records will be registered. Last Friday, the Ministry of Finance indicated that the country’s public debt stood at around 102.2 billion dinars at the ending of October 2021, an upsurge of 12% compared to the same period last year, to represent 81, 5% of GDP. 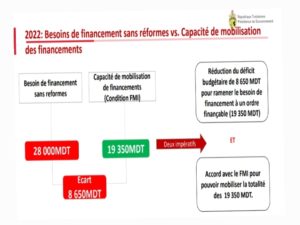 The ministry stated the external debt stood at approximately 62 billion dinars, representing 49% of the GDP, while the domestic debt stood at around 40.2 billion dinars, which is equal to 32% of the GDP, remarking that the cost of servicing the debt amounted to 11.3 billion dinars during the first ten months of this year.
Tunisia- IMF
The governor of the Central Bank of Tunisia, Marouane Abbasi, had proposed, in a recent statement, that the country would succeed in reaching an arrangement with the IMF in the first quarter of next year, after offering an economic reform program. that the government must execute over the next four years.
Despite attempts by the Tunisian authorities to obtain funding from Arab countries, the Bouden government was only capable to sign one financial agreement with Algeria in the amount of $ 300 million, which Tunisia received in the form of a loan during Algerian President Abdelmajid Taboune’s visit to Tunisia earlier this month.
On the other hand, other pledges of financial aid from other countries which supported the decisions of the Tunisian president on July 25 are still slow to materialize, while the director-general of finance and external payments of the Central Bank, Abdelkarim Lassoued , revealed last October that there were “very advanced” discussions with Saudi Arabia and the United Arab Emirates in order to obtain substantial funding.
Partagez9
Tweetez
Partagez
+1
9 Partages