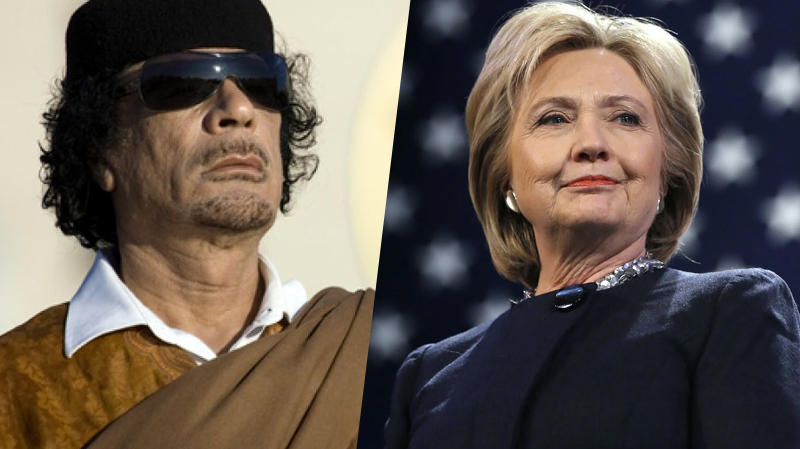 Many leaked e-mails associated to former US Secretary of State Hillary Clinton unveiled French and British scheme to split Libya particularly after the ouster of the late leader Muammar Gaddafi, according to media reports published on Monday.

A leaked American document showed that French President Nicolas Sarkozy ordered the intervention in Libya in order to preserve his country’s influence in the region, Sky News reported.

The document, which carries the date of April 2, 2011, indicated that “whoever moved France to intervene in Libya in order to overthrow Gaddafi is what the man had of tons of gold, in addition to the large Libyan stockpile of oil.”

In late March 2011, these massive stocks of gold and silver were transferred from the Libyan Central Bank’s vaults in Tripoli to the city of Sebha, in southwestern Libya, towards the Libyan border with Niger and Chad.

According to leaked Clinton letters, “Gaddafi planned to use these quantities of gold and silver to produce an African currency based on the Libyan gold dinar, with this currency being the main one in French-speaking countries.”

The value of this quantity of gold and silver is estimated at more than $ 7 billion, and French intelligence officers discovered this plan shortly after the start of the popular uprising in Libya against Gaddafi, and it was one of the important factors that prompted Sarkozy to intervene in Libya.

The document leaked from Clinton’s mail listed 5 reasons that prompted France during the Saccouzi era to intervene in Libya in order to overthrow Gaddafi: first, the desire to obtain a larger share of Libyan oil production, second, increasing French influence in North Africa, third, improving its internal political position and reputation In France, fourth, it gave the French army an opportunity to reassert its position in the world, and fifth, prevent Gaddafi’s influence in what the French president considers “Francophone Africa.”