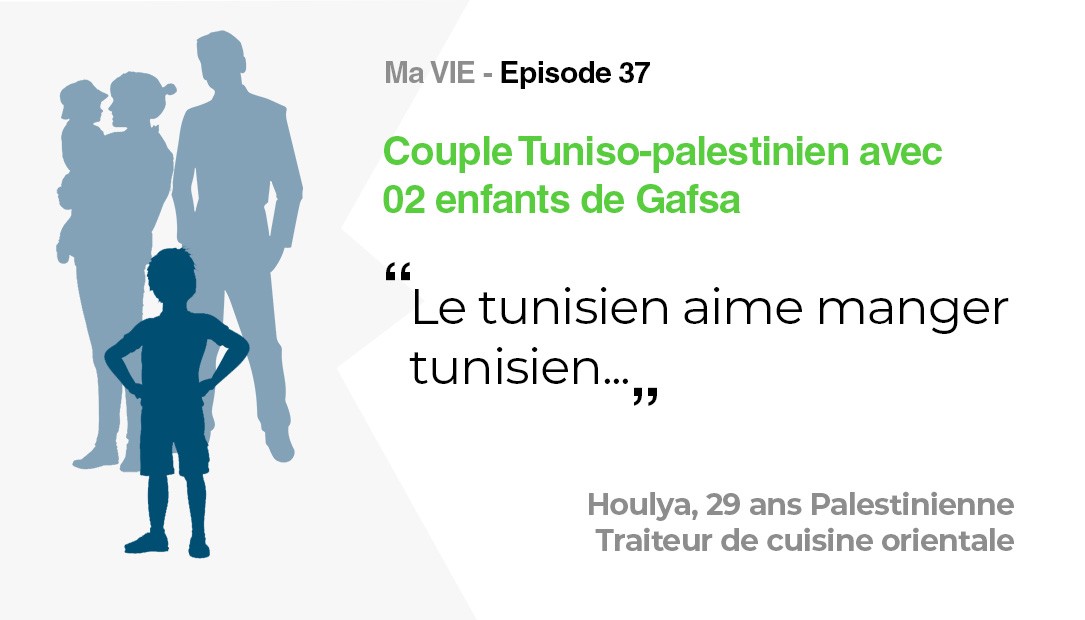 Tunisie Numérique has conducted a series of interviews with Tunisian families to find out how they handle their budgets in these times of crisis that the country is going through.

These Tunisians come from various social classes, of different ages, and live in both posh and popular neighborhoods. They voluntarily consented to answer in a spontaneous and anonymous manner to the questions of Tunisie Numérique. The stories have been transcribed as they are.

Jamel is from the small town of Sidi Aïch( Gafsa). He is 34 years old.

His wife, Houlya is 29 years old. she is of Palestinian origin.

The couple has been married for 10 years. They have two boys aged 8 and 2 years old.

Jamel tells us about his meeting with his wife: “I was on a mission in Turkey. It was love at first sight. I didn’t waver for a moment. I took the lead, armed myself with courage, and asked for her hand for marriage! We got married a few weeks later. “

Jamel is giving a romantic look at Houlya and said to us, “No, I’m not crazy. I knew at first glance that she will be the woman of my life. I moved to Turkey single and returned to Tunisia married. It was my destiny. “

The couple lives in a rental home in the suburbs of Gafsa. The monthly rent is 350 dinars.

Jamel is a civil servant in a public company in Gafsa. He receives a monthly wage of 1,200 dinars.

Houlya has just opened a small caterer specializing in Palesinian and Eastern cuisine. Her project permits her to generate a net profit of 1,000 dinars per month.

Go into debt to consume

Jamel confesses to us: “2/3 of our income is spent on food products and cleaning products. During Ramadhan, this expense post can quickly attain half of what is won. This year the budget exploded. The prices are skyrocketing and it doesn’t happen anything good! ».

Houlya intervenes and tells to us: “I take advantage of my caterer project to bring the unsold home for meals or dinners home. I kill two birds with one stone. This avoids food waste and allows us to save a little money. “

Jamel speaks and says, “We make a lot of efforts to lower the extras and impulsive purchases. The Tunisian official no longer succeeds. We go into debt to consume. “

Jamel tells us that on the occasion of the beginning of the school year, he had to borrow money from his big sister.

He tells us about it: “The bank denied me consumer credit on the pretext that my salary was quite low. I had no other solution than to request my sister Hiba money. She lent me 500 dinars. I likewise borrowed from my best friend, Hazem, the sum of 2,000 dinars. I needed this amount to pay for the start of the boys’ school year and also the return tickets, from Ghaza-Tunis via Cairo, my wife, and 02 boys. They left during the summer holidays with the beautiful family ”.

Houlyai confides in us and said, “I had a lot of problems integrating during the first years of marriage to Jamel. Local culture and customs are significantly different Palestinian. And especially the kitchen! ».

Houlya launches a shy and continuous laugh: “Tunisian cuisine was a shock treatment for me. It was too spicy and boundless. I felt like I was an alien. I was the only one to find it spicy and. Yet in Palestinian cuisine we use a lot of spices! ».

Houlya continues with humor: “I could not escape the Harissa and the Felfel Har فل حار. During my first month of marriage we had to move to neighboring governorates to find something to eat Palestinian or at least Eastern ”.

Houlya tells us having difficulties with her project in her early days. She tells us about this: “Palestinian and eastern cuisine was not popular enough. I actually discovered that it was simply unknown. I arranged tastings and customers quickly asked again. The kitchen allows you to travel at the slightest blow. The best trip is a culinary trip! ».

Houlya is kidding: “Hamden Lellah – حمدا الله The project took off otherwise we would have suffered from obesity with all the unsold that we had to eat at the start of the project”.

Houlya continues to speak with passion about her project: “I quickly desired to enlarge the project and diversify the products. I even thought of offering the catering service for the holidays, receptions, and other prospects but it was risky. Tunisian likes to eat Tunisian. Even if, out of curiosity, he discovers a new cuisine, he returns to Tunisian, couscous, keftaji, Tunisian dish, lablabi,… ”.

Houlya wants to go to Canada, Jamel rejects the idea

Houlya takes on a more serious air and says: “Unfortunately, my project will not be capable to evolve and generate more money. I proposed to Jamel to go to live in Canada since I have a physiotherapist diploma quite requested there, unlike here. With my diploma and despite all my requests I could not get a job either in the public or in private sector. “

Jamel interferes and lets us know that he is not very enthusiastic about leaving the country for Canada. He says this: ” I’m not enthusiastic to go to Canada particularly since I have 4 hectares of organic olive trees. This mini land can generate respectable income in a few years. You have to be patient “.

The couple declares to spend 300 dinars on cakes and new clothes for boys during Eid.

The family saves 400 dinars to purchase the Eid sheep.

The family does not provide a specific budget for the holidays. Houlya visits her family once a year.

MEGARA Challenges 2022: Issues and challenges of the circular economy in Tunisia, the MENA Region and Africa
Tunisa-Ukraine Ambassador to Tunisia : Ukrainian diaspora in Tunisia
To Top