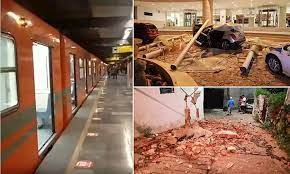 A strong earthquake hit southwestern Mexico near the beach resort of Acapulco on Tuesday, killing at least one man who was crushed by a falling post, and generating rockfalls and damaging buildings, authorities announced.

The quake of magnitude 7.0, which hit 11 miles (17.7 km) northeast of Acapulco, shook the hillsides around the city, downing trees and pitching large boulders onto roads, causing power outages in several states.

The U.S. Geological Survey (USGS) said Tuesday’s quake, initially measured at a magnitude of 7.4 and later downgraded to 7.0, was relatively shallow, just 12 miles below the surface, which would have amplified the shaking effect.