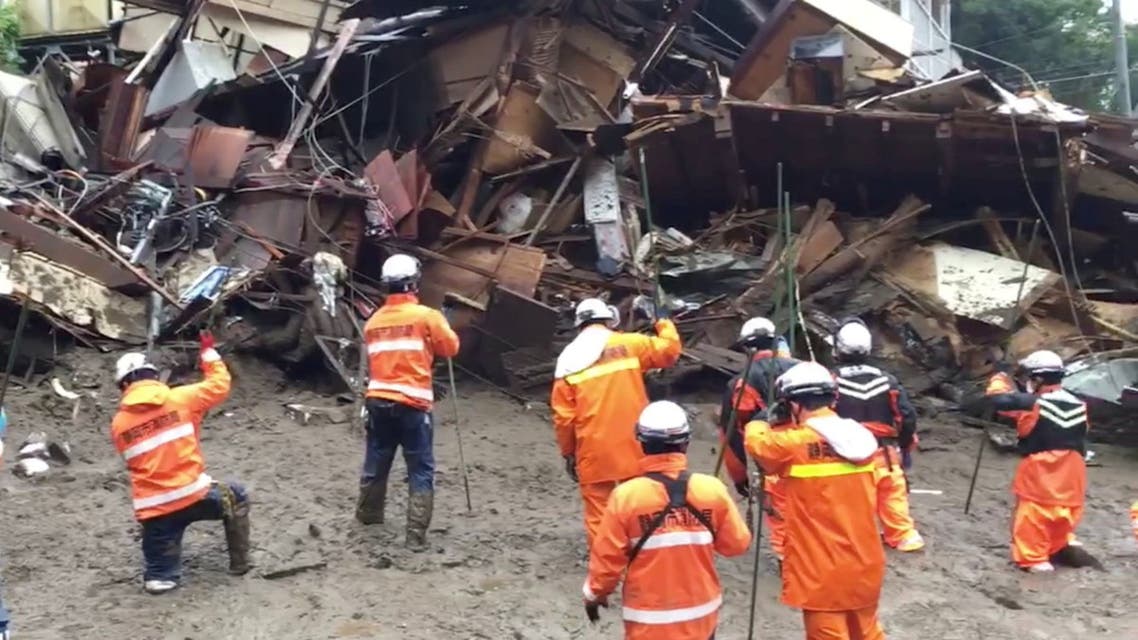 Rescuers in Japan searched on Monday for 80 people believed to be missing two days after landslides tore through the seaside city of Atami, destroying houses and burying roads under mud and rock.

The official death toll from the landslides that hit early on Saturday is four, according to Atami city spokesperson Hiroki Onuma, while the number of missing had come down from 113 earlier.

“My mother is still missing,” one man told NHK television. “I never imagined something like this could happen.”

Atami, with a population of 36,000, is 90 kilometer (60 miles) southwest of Tokyo, set on a steep slope leading down to a bay. It is famous for a hot springs resort.

This grab taken from handout video released by a local resident and received via Jiji Press on July 3, 2021 shows mud and debris at the scene of a landslide that has left at least 19 people missing in the Izusan area of Atami in Shizuoka Prefecture. (AFP)

The landslides are a reminder of the natural disasters – including earthquakes, volcanic eruptions and tsunami – that haunt Japan, where the capital Tokyo is to host the summer Olympics beginning this month.

By Monday, the number of rescuers at the disaster site had risen to 1,500, officials said.

Prime Minister Yoshihide Suga said police, firefighters and members of the military were doing all they could to help with the search.

“We want to rescue as many victims … buried in the rubble as soon as possible,” Suga told reporters.

A 75-year-old man had a lucky escape when the house across from his was swept away. The couple living there are missing.

“This is hell,” the man said from an emergency shelter.

The landslides were triggered by torrential downpours – with some areas receiving more rain in 24 hours than they would usually get for the whole of July.

About 130 buildings were affected in Atami.

Chief Cabinet Secretary Katsunobu Kato called for vigilance, with the ground so saturated and weakened that even light rain could prove dangerous.

Onuma said the rain had stopped in Atami but more was forecast.

“The situation is unpredictable,” he said.

The disaster boosted the stocks of some engineering firms on Monday.