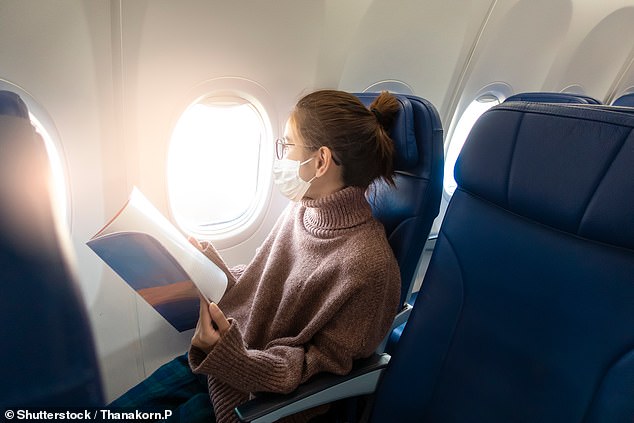 A woman likely became infected with the novel coronavirus after she used an airplane bathroom, a new report suggests.

The 28-year-old was among about 300 South Koreans who were evacuated from Milan, Italy, on March 31 – in the midst of the pandemic’s height Europe, researchers wrote in the Centers for Disease Control and Prevention’s journal Emerging Infectious Diseases.

The team, from Soonchunhyang University College of Medicine, in Seoul, South Korea, says the woman wore an N95 mask for the duration of the flight, except when she went to use the toilet.

At least one person who had COVID-19, but was asymptomatic at the time, also used the restroom, making it likely that the 28-year-old breathed in infectious droplets or touched a contaminated surface.

The flight, which was organized by South Korean officials, was conducted with strict infection control measures including testing everyone before boarding.

Of the 310 passengers who arrived at the Milan airport, 11 who exhibited symptoms of coronavirus were not allowed on the plane.

The remaining passengers were given N95 respirators and kept six feet apart for social distancing before boarding.

‘Most passengers wore the N95 respirators except at mealtimes and when using the toilet during the flight,’ researchers wrote.

‘After an 11-hour flight, 299 asymptomatic passengers arrived in South Korea and were immediately quarantined for two weeks at a government quarantine facility in which the passengers were completely isolated from one another.’

Upon landing, six received positive results for SARS-CoV-2 and were transferred immediately to a hospital.

On the eighth day of quarantine, the 28-year-old began reporting symptoms including coughing, nasal discharge and muscle pain.

She was transferred to a hospital on day 14, where she tested positive for COVID-19

The woman had only taken off her mask to use the toilet, making restroom transmission ‘the most plausible explanation,’ the researchers said.

They added there is little to suspect that the woman was infected before the flight because she quarantined at home for three weeks and did not leave.

‘Given that she did not go outside and had self-quarantined for three weeks alone at her home in Italy before the flight and did not use public transportation to get to the airport, it is highly likely that her infection was transmitted in the flight via indirect contact with an asymptomatic patient.’

The study is among the first to show that the novel coronavirus can be transmitted on an airplane.

This was already theorized by scientists after previous reports found that other diseases, such as the flu, can also spread inflight.