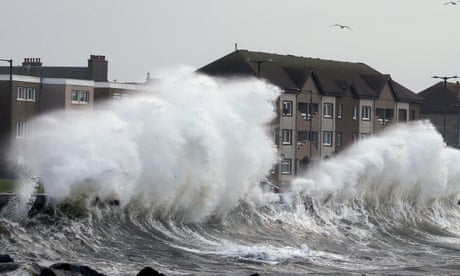 Severe warnings have been declared across parts of northern Europe as Storm Ciara sweeps across the continent.
Powerful winds and heavy rainfall proceed to hit areas of Ireland, France, Belgium, Switzerland, the Netherlands, Germany, Luxembourg and Scandinavia.
The storm caused travel interruptions and the abolition of several public events over the weekend.
Forecasters predict it will continue to move south-eastwards, bringing gusts of over 90mph (145km/h) in some areas, reports the BBC.
In Ireland, around 14,000 homes and businesses were left without power as the country starts including ballots for its general election.
Organisers also dropped an opening ceremony to mark the beginning of Galway’s year as the European Capital of Culture, citing public safety.
Over in Denmark, a woman and a child had to be recovered from the North Sea after they were swept into the water while walking along a pier.
France published amber warnings – its second-highest level – for 42 regions of the country, including Normandy, the Ardennes and Lorraine.
People in the country have been warned to stay away from coastal and wooded areas, several cities have closed off parks and seaside promenades.
Forecasters in Norway, meanwhile, have issued red warnings – their highest risk level – for some southern and western areas due to concerns about high seas
Gale force winds grounded hundreds of flights in Germany, Belgium and the Netherlands. Frankfurt, Brussels and Amsterdam Schipol were among the airports affected.
German railway firm Deutsche Bahn also warned of severe disruptions in the north of the country.