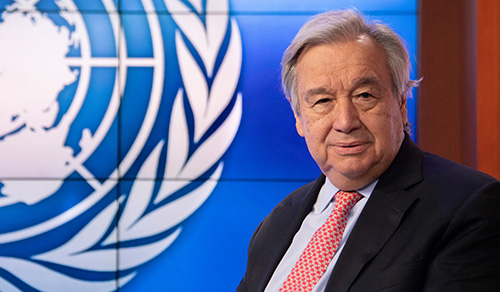 The climate crisis is a code red for humanity.

World leaders will soon be put to the test at the UN Climate Conference — known as COP26 — in Glasgow.

Their actions — or inactions — will show their seriousness about addressing this planetary emergency.

And the respected medical journal The Lancet just described climate change as the “defining narrative of human health” in the years to come — a crisis defined by widespread hunger, respiratory illness, deadly disasters and infectious disease outbreaks that could be even worse than COVID-19.

Despite these alarm bells ringing at fever pitch, we see new evidence in the latest UN reports that governments’ actions so far simply do not add up to what is so desperately needed.

Recent new announcements for climate action are welcome and critical — but even so, our world is on track for calamitous global temperature rises well above 2 degrees Celsius.

This is a far cry from the 1.5 degree Celsius target to which the world agreed under the Paris Agreement – a target that science tells us is the only sustainable pathway for our world.

This target is entirely achievable. If we can reduce global emissions by 45 per cent compared to 2010 levels this decade.

If we can achieve global net-zero by 2050. And if world leaders arrive in Glasgow with bold, ambitious and verifiable 2030 targets, and new, concrete policies to reverse this disaster.

G20 leaders — in particular — need to deliver. The time has passed for diplomatic niceties. If governments — especially G20 governments — do not stand up and lead this effort, we are headed for terrible human suffering.

But all countries need to realize that the old, carbon-burning model of development is a death sentence for their economies and our planet.

We need decarbonization now, across every sector in every country. We need to shift subsidies from fossil fuels to renewable energy, and tax pollution, not people. We need to put a price on carbon, and channel that back towards resilient infrastructures and jobs.

And we need to phase-out coal — by 2030 in OECD countries and 2040 in all others. Increasing numbers of governments have pledged to stop financing coal — and private finance needs to do the same, urgently.

People rightly expect their governments to lead. But we all have a responsibility to safeguard our collective future. Businesses need to reduce their climate impact, and fully and credibly align their operations and financial flows to a net-zero future. No more excuses; no more greenwashing. Investors — public and private alike — must do the same.

They should join front runners like the net-zero asset owners alliance, and the UN’s own pension fund, which met its 2021 carbon reduction investment objectives ahead of time and above its target, with a 32 per cent reduction this year. Individuals in every society need to make better, more responsible choices in what they eat, how they travel, and what they buy.

And young people — and climate activists — need to keep doing what they’re doing: demanding action from their leaders and keeping them accountable. Throughout, we need global solidarity to help all countries make this shift. Developing countries are grappling with debt and liquidity crises.

They need support. Public and multilateral development banks must significantly increase their climate portfolios and intensify their efforts to help countries transition to net-zero, resilient economies.

The developed world must urgently meet its commitment of at least $100 billion in annual climate finance for developing countries. Donors and multilateral development banks to allocate at least half their climate finance towards adaptation and resilience.

The United Nations was founded 76 years ago to build consensus for action against the greatest threats facing humanity. But rarely have we faced a crisis like this one – a truly existential crisis that — if not addressed — threatens not only us, but future generations. There is one path forward. A 1.5 degree future is the only viable future for humanity. Leaders must get on with the job in Glasgow, before it’s too late.