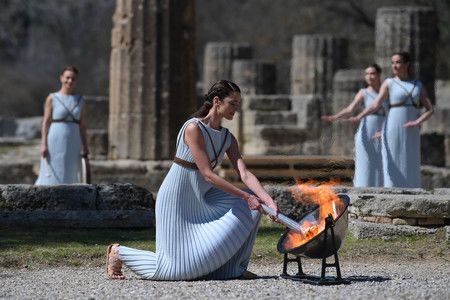 The lighting ceremony of the Olympic flame for this summer’s Tokyo Games was held on Thursday at the ruins of the Temple of Hera in the Olympia archaeological site in Greece.

After the ceremony, Mizuki Noguchi, the gold medalist of the women’s marathon in the 2004 Athens Olympics, took the torch as the second runner of a relay in Greece and ran about 200 meters. She is the first Japanese to bear the torch in a relay for the Tokyo Olympic Games.

The ceremony was scaled down from the initial plans and took place without spectators, with only related officials participating, at a time when the new coronavirus is spreading in Greece, like in many other countries including Japan.

After the week-long relay in Greece, the Olympic flame will be handed over to the Tokyo Games organizing committee at a ceremony in Athens on March 19 and will arrive in Japan the following day, at the Japanese Air Self-Defense Force’s Matsushima base in the city of Higashimatsushima in Miyagi Prefecture in the Tohoku northeastern region in the country.

After being displayed in Miyagi, Iwate and Fukushima prefectures, which were hit hardest by the March 2011 powerful earthquake and tsunami, the torch relay in Japan will start on March 26 from the J-Village national sports training center in the Fukushima town of Naraha.