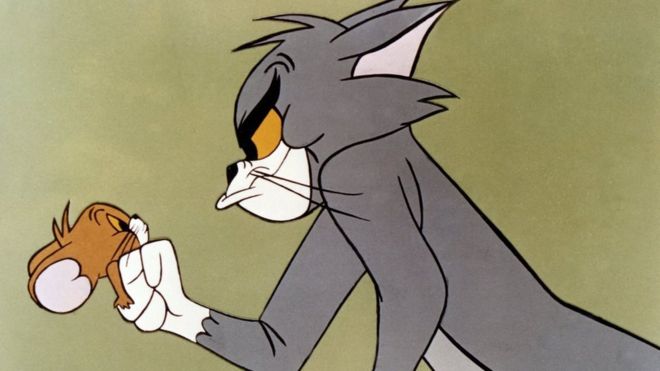 A cartoon cat, sick of the annoying mouse living in his home, devises a plot to take him out with a trap loaded with cheese. The mouse, wise to his plan, safely removes the snack and saunters away with a full belly.

You can probably guess what happens next. The story ends as it almost always does: with the cat yelling out in pain as yet another plan backfires.

The plot may be familiar, but the story behind it may not be. From Academy Award wins to secret production behind the Cold War’s Iron Curtain – this is how Tom and Jerry, who turn 80 this week, became one of the world’s best known double-acts.

The duo was dreamt up from a place of desperation. MGM’s animation department, where creators Bill Hanna and Joe Barbera worked, had struggled to emulate the success of other studios who had hit characters like Porky Pig and Mickey Mouse.

Out of boredom, the animators, both aged under 30, began thinking up their own ideas. Barbera said he loved the simple concept of a cat and mouse cartoon, with conflict and chase, even though it had been done countless times before,, BBC News reports.

These Tom and Jerrys are almost universally considered the best, with rich hand-drawn animation and detailed backdrops helping win them seven Academy Awards and cameos in Hollywood feature films.

“I’ll bet when you watched them as a child, or even if you look at them right now, you would be hard-pressed to know when they were made,” says Jerry Beck, a cartoon historian who has worked in roles across the industry.

“There’s something about animation. It’s evergreen, it doesn’t fade,” he says. “A drawing is a drawing, it’s like when you go see paintings. Yes, we know they’re from the 1800s or 1700s – it doesn’t matter and it still speaks to you today.”

“That’s the thing with these cartoons. What we’ve learned in time is that they really are great art. They’re not disposable throwaway entertainment,added BBC.

Tom and Jerry, with its slapstick violence and dark comedy, remains extremely popular around the world today. It can be found on children’s television everywhere from Japan to Pakistan and a new mobile phone game has more than 100m users in China.

In the 80 years since their creation, the cat and mouse have appeared in everything from a “kids” version to a 1992 musical movie where they sang and spoke.