Partagez9
Tweetez
Partagez
+1
9 Partages
The former head of aircraft security, Abdelkarim Laâbidi, who had lodged a complaint against former deputy Fatma Mseddi, for baseless accusations, in relationship with his involvement in the networks sending jihadists to the combat zones, and who got Mseddi a 4 months imprisonment sentence, announced that he was withdrawing his complaint and was giving up on prosecution.
Partagez9
Tweetez
Partagez
+1
9 Partages 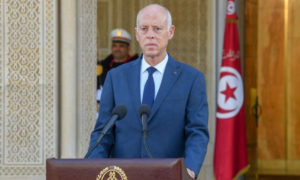 Tunisia-Abir Moussi to Kais Saied: I am here to defend my country and I will not leave
Tunisia-[Video]Security forces stop Abir Moussi from hoisting the Tunisian flag
To Top