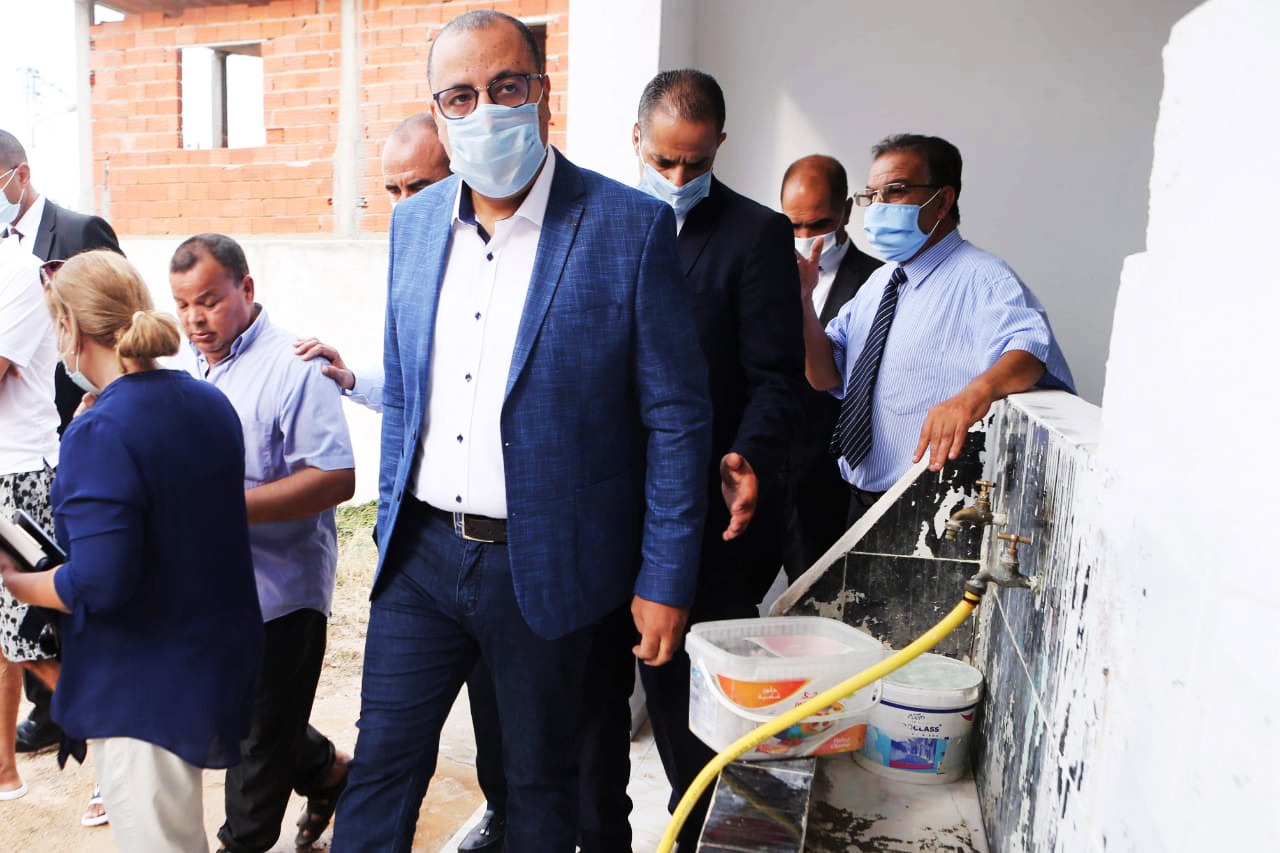 As a follow-up of his series of inspection visits and in an unannounced visit, today, Sunday, September 13, 2020, Prime Minister Hichem Mechichi headed to the state of Zaghouan, particularly to the Inspection Commission, where he visited the primary school in Damda where he closely observed the preparations of this school .

The Prime Minister examined the three sections that make up this school and was notified of the conditions for the return of the students, he expressed surprise that the school, whose construction dates back to 1986, was not fenced off.

PM Mechcihi I also went to the state of BenArous, where he visited the primary school in Al-Tayeb Al-Muhairi neighbourhood in Muhammadiyah where he saw the lack of readiness of this school to receive students as the construction work continues in it, and he further stopped at many deficiencies in the toilets.

From Muhammadiyah, the prime minister turned to the preparatory school in  Wardia, where he surprised by the shabby situation he found in a school that is only a few kilometres away from the centre of the capital, stressing that the talk about preparations to confront the Covid-19 pandemic is negated in light of the catastrophic conditions in public schools.

In a media statement,he said that this visit is a continuation of the series of visits he has made since yesterday, adding that he believes in the necessity of fieldwork to discover the extent of the readiness of the public facility in general, including schools and institutes.

Jr added that the visit enabled him to see many deficiencies that are not befitting of Tunisia in the year 2020, adding that it is unacceptable that a student does not obtain the most basic necessities in his school, such as sanitation and water.

The Prime Minister added that the status of these schools reflects the many difficulties that the country has known in terms of education, stressing that the public school must return to its true role as a means of social advancement and remain as the beacon that illuminates its surroundings, even in the popular and rural areas.

Mechichi stressed that his government, the Government of Achievement, is set to work to restore the glow of the public facility and revive the attractiveness of the public school without invoking the bureaucracy and lack of resources, by doubling the work to bypass these shortcomings and stop the bleeding that has disrupted the train of development for years.

Tunisia-Chebika: A grenade in the house of the Omda
Tunisia-Monastir: 38 new cases of coronavirus in 24 hours
To Top