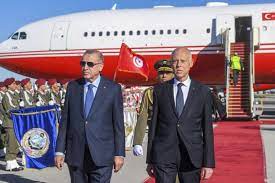 Turkish President Recep Tayyip Erdogan has called the dissolution of Tunisia’s parliament a “blow to the will of the Tunisian people,” marking the strongest criticism by Ankara to date of the political crisis unfolding in the North African country.

Tunisian President Kais Saied dissolved the country’s parliament on Wednesday and vowed to prosecute MPs who held a plenary session online and voted through a bill against his “exceptional measures”.

The online session represented parliament’s most direct challenge to Saied after he suspended the chamber last July, brushed aside most of the 2014 constitution, and moved to rule by decree.

In a written statement on Monday, Erdogan said he was saddened by the dissolution of parliament and by reports that Saied would prosecute lawmakers who joined the online session in defiance of the president.

“We hope that these developments won’t harm the transition period to restore democratic legitimacy and we value the realisation of the roadmap for elections,” Erdogan said.

“We believe the developments in Tunisia are staining democracy. It is thought-provoking for the future of Tunisia that an assembly with elected officials was dissolved. And it is a blow to the will of the Tunisian people.”
Partagez1
Tweetez
Partagez
+1
1 Partages

Tunisia-Popularity barometer of the 3 presidents – Wave 20: Najla Bouden and Kaïs Saïed, the parallelism of popularity
Geopolitical disruptions spur the potential for an energy crisis in Europe
To Top