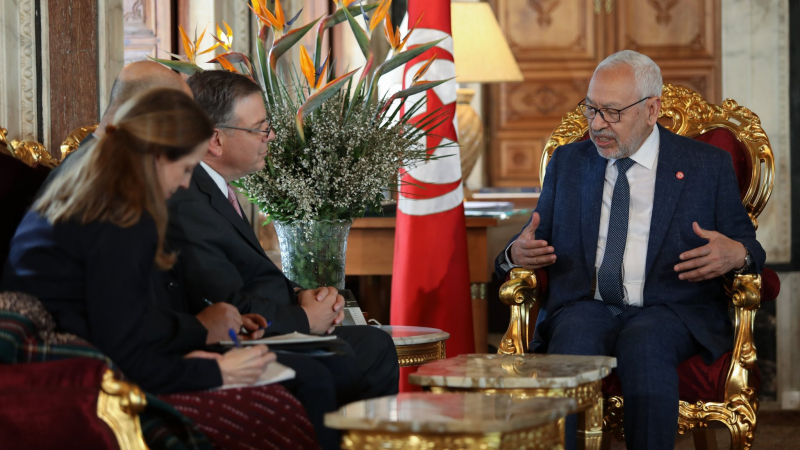 House speaker Rached Ghannouchi welcomed U.S ambassador to Tunisia, Mr. Donald Blome at Bardo palace.
Mr Blome hailed the Tunisian experience, the democratic path and the achievements of the Tunisian people since the revolution ignited, he expressed the positivity and the strongness of the partnership between two countries. He further expressed his satisfaction at the level of economic collaboration which is perceived due to the policy of advanced negotiations.

The ambassador expressed that his country perceives Tunisia as a powerful trade gateway to the African continent, a factor that will be noticeable during the upcoming Prosper Africa summit.

He besides emphasised the enormous effort done by Local Tunisian companies to market their products in his country.

Regarding the Libyan file, Ambassador Blome stated that the U.S  has been monitoring the situation and is pushing toward a political resolution. Hailing Tunisia effort in fighting terrorism and enhancing security,.He pointed out his country faith in the Crucial role of Tunisia in the Libyan crisis.

On his part, Ghannouchi pointed out that the political situation in Tunisia is comparatively stable, adding that his country needs double relief at the economic and social levels to attain resolutions to the difficulties of employment, marginalization and the equitable distribution of wealth.

He exclaimed that the next stage requires significant reformations that include enhancing the investment environment and obtaining solutions to problems stemming from dealing with hard currency.

In the same context, he expressed the anger of the Tunisians due to the Deal of the century. He added that organization and trade unions have organized marches to denounce the deal.

He stressed toward the American ambassador the need to differentiate between the struggle to liberate the Palestinian territories and terrorism.

Tunisia-After 29 years, Iraq to settle down the state of 2 Presidential jets in Tunisia
Tunisia-Tunisia reemphasises rejection of establishing any form of relationship with Zionist entity even in sports competitions
To Top