Tunisair CEO Olfa Haldi chose this Sunday to move to the counteroffensive after the severe attack she experienced from the UGTT and its members.

Hamdi posted a post on her Facebook page in which she started reacting to  Tabboubi’s attack, telling him that he is not the right man to lead the Tunisian General Labour Union” UGTT “.

She consequently exposed the secret Tabboubi and his organization relentlessness against her, assuring that a few days after assuming office, she obtained a letter from Tabboubi, who asked her, based on a supposed order of the presidency of the government, an advance quantified in millions of dinars, in respect of the fees for memberships of Tunisair agents to the UGTT.

She stated that she did not give the advance, due to the company’s financial situation, adding she was astonished at the request from someone who claims to want to save the company. 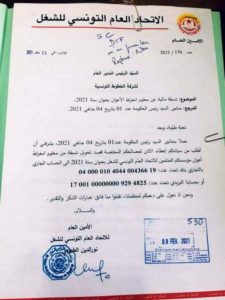