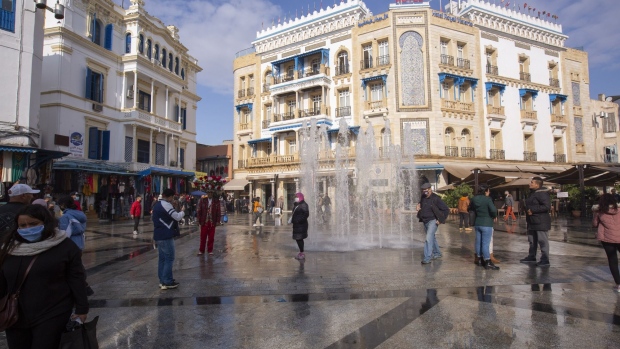 Tunisia is in “very advanced discussions” with Saudi Arabia and the United Arab Emirates for sorely needed financial aid and talks with the IMF are ongoing, a central bank official said, as the nation’s political crisis weighs on already dire economic ills.

An agreement with the two Gulf states may be reached soon, the head of financing and foreign transactions at the Tunisian regulator, Abdelkarim Lassoued, said Saturday in a phone interview. He didn’t give details on the amount of aid being discussed.

Tunisia is battling long-running economic troubles and has been mired in fresh political upheaval since late July, when President Kais Saied suspended parliament and assumed more powers. The turmoil led Moody’s Investor Service last week to cut its assessment of Tunisia by one notch, to Caa1. The central bank recently voiced concern over an “acute” drying up of foreign financing and the sustainability of public debt.

Lassoued said the nation would be able to meet its foreign commitments through the end of 2022, and that if a deal with the International Monetary Fund is reached and reforms are launched at the beginning of the year, “there will be no problem in repaying debts.”

Lassoued, who had earlier stressed that authorities must take prompt action to avert a deepening of the crisis, said the central bank and Finance Ministry have had recent discussions with the Washington-based lender about possible economic reforms and there’s been “progress on the technical level.”

“The government must act quickly,” he said. “It’s time for real reforms.” He added that officials must reach consensus with trade unions and business leaders on the steps so they can be enacted as soon as possible.

Tunisia is looking to secure $4 billion from the IMF over three years to help revive the economy after last year’s 8.6% contraction. Earlier efforts to trim a daunting public-service wage bill and other costs, in part through raising fuel prices or possible subsidy cuts, have been met with resistance by the nation’s powerful UGTT labor union.

Saied’s power grab, which critics have dubbed a coup, has cast a shadow over efforts to revive an economy already battered by a combination of factors, ranging from political bickering to terrorism and the Covid pandemic