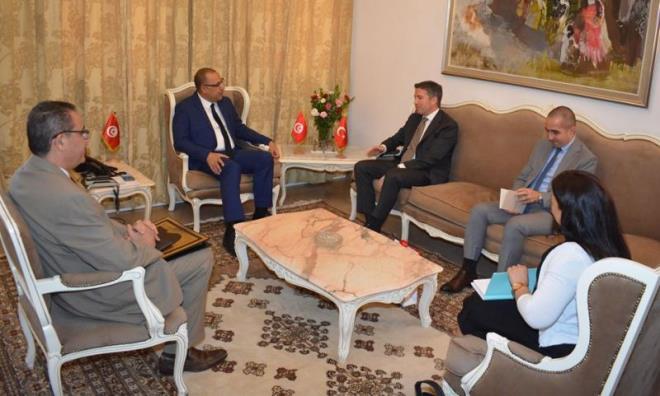 Interior Minister Hichem Mechichi met on Monday with the ambassador of Turkey to Tunisia, Rafik Ali Onaner, who emphasised, on this opportunity, “the excellence of bilateral relations”, hailing the measures adopted by the Tunisian government to battle against the spread of coronavirus, a statement of the ministry reads.
The Turkish diplomat further accentuated, “the fundamental position that the different structures of the Ministry of Interior have played in this situation”.
For his part, Minister Mechichi embraced “the level of cooperation concluded with the Turkish side in the areas of activity of the different structures of the Ministry of the Interior, emphasising the significance of operating to promote it further in the coming period”.
During the meeting, the two sides examined issues of common interest, in special those correlated to the prerogatives of the Ministries of the Interior of both countries, in particular as regards the cooperation in the fields of training, the fight against terrorism and equipment support.

Tunisia-Expanding speed of investment and development of maritime trade at Heart of PM Fakhfakh -FM Dendias meeting
Tunisia-Noureddine Taboubi: Battle in Sfax is a political fight par excellence
To Top