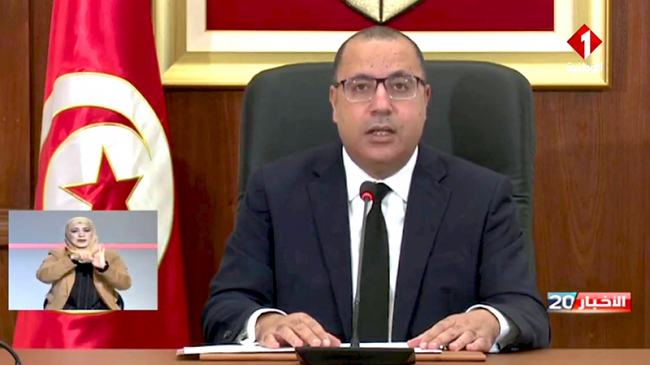 Partagez1
Tweetez
Partagez
+1
1 Partages
Addressing the nation, prime minister Hichem Mechichi said he understood the demonstrators and their desire to speak out but also reiterated that there is no justification for not complying with the curfew, acts of pillage and degradation of property. “I understand your demands, but there is a difference between legitimate protests and acts of pillage and violence,” he said.
He expressed his understanding of the complex situation in several regions. He stated he understood the outrage of Tunisians over a difficult economic and social situation. But he added he warned that the law will be applied against rioters and all those who do not respect it. “We are not going to allow rioters to break into peaceful protests under any circumstances. We must implement the law against all those who loot and vandalize private and public properties, ”he said.
Speaking mainly to young people, Hichem Mechichi said: “You are the future of this country, its main wealth (…) but avoid being used (…) because anarchy has no place.”
Partagez1
Tweetez
Partagez
+1
1 Partages