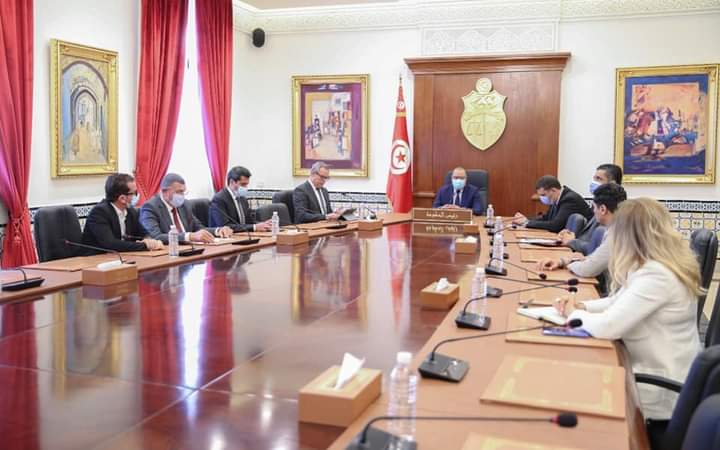 A working session chaired by prime minister Hichem Mechichi was held on March 29, 2021, at the Kasbah Palace, in the presence of the parliamentary belt of the government.

The session was attended by the leader of the Ennahda movement bloc, Imed Khemiri and Anwer Maarouf, leader of the Qalb Tounes bloc, Oussama Khlifi and Iyadh Elloumi and the leader of reform Bloc  Hassouna Nassfi the Secretary-General of Tahya Tounes Sonia Ben Cheikh and the representative of the National Bloc Imed Ouled Jebril.

During the meeting, Mechichi called for the necessity to unite and intensify consultations among the components of the political belt given the scale of the hurdles ahead, and the need for our nation to further coordinate the efforts within the framework of partnership with the international economy, organizations, donors and brotherly and friendly countries in the face of this difficult financial crisis.

He also indicated that the government has begun to operate on the economic rescue plan, in consultation and coordination with the parties, the support blocs, the social partners and various components of the economic fabric, setting the preliminary outline of this project in order to support it.

Asserting that the components of this plan will be presented to the parties and blocs supporting the government and will put all the specialists at their disposal and will listen to all their recommendations and perceptions on this project and how to enrich it to become a participatory plan bringing together all the actors concerned to provide all the precursors to success and get out of the tough financial situation.

Tunisia- Salem Labiadh: Ennahdha has a stranglehold on justice
Tunisia-Hichem Mechichi: “Economic and financial situation is extremely dangerous
To Top