Tunis Survey, a leading expert in online surveys and digital studies, has just published the results of its Popularity Barometer of the three presidents.

This barometer is based on a self-administered online survey which took place from June 26 to July 03, 2020. It aims to measure Tunisian internet users satisfaction with the performance of the 3 presidents: Kaïs Saïed, Rached Ghannouchi and Elyes Fakhfekh.

This is the fifth wave of the barometer.

During the third wave, PM Elyes Fakhfakh was the single one out of the three presidents to still had the sympathy of respondents with 69% satisfied versus 75% in the second wave.

In the fourth wave, Elyes Fakhfakh lost popularity and slipped into unpopularity alongside the other 2 presidents.

For this fifth survey, the current sample number after screening include 1466 respondents.

Here below the main results of the 5th wave:

Tunisians are still dissatisfied with the performance of the 3 presidents. The popularity of Elyes Fakhfekh is dropping dramatically, he placed second in the podium of unpopularity after Rached Ghannouchi.

Lack of confidence and the absence of a program are the principal reasons for dissatisfaction: 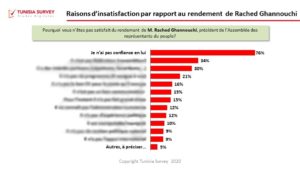 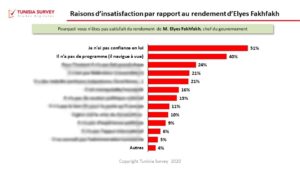 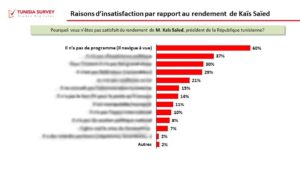 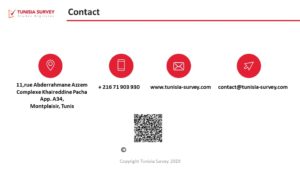