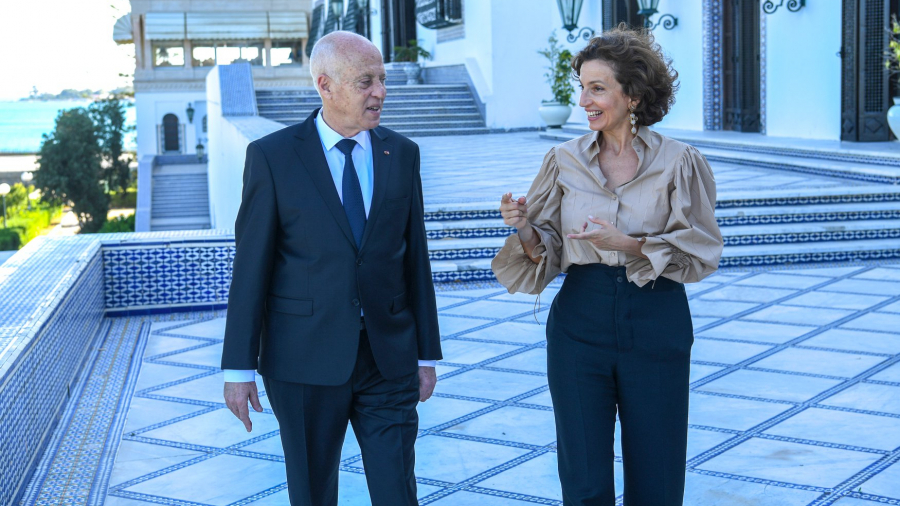 President of the Republic Kais Saied welcomed this Monday the Director-General of Unesco Audrey Azoulay at Carthage Palace who is currently carrying an official visit to Tunisia, as part of her participation in the eighth session of the Conference of States parties to the 2001 Convention on the Underwater Cultural Heritage.

The head of the state hailed the leading role that Unesco operates in the dissemination of science, education and culture throughout the world.

He further examined the efforts made by Tunisia in terms of the maintenance of national and international heritage.

The head of the state also reaffirmed the call to consolidate partnership with Tunisia through the transformation of its project office into a country office in Tunisia and to secure that the Island of Djerba, which is preparing to host the 18th Francophonie Summit at the end of this year, is included in the UNESCO World Heritage List.
For her part, the Director-General of Unesco commended the crucial role played by Tunisia within Unesco, especially in education, new communication technologies and heritage preservation.

In a statement following her meeting with the Head of State, Audrey Azoulay stated that the meeting was an occasion to present an overview of the principal activities of the Organization in the fields of culture, education and dissemination of knowledge.

The interview, she added, including looked at mechanisms for protecting World Heritage and ways to improve the education sector in the post-covid period in addition to increasing scientific cooperation internationally.