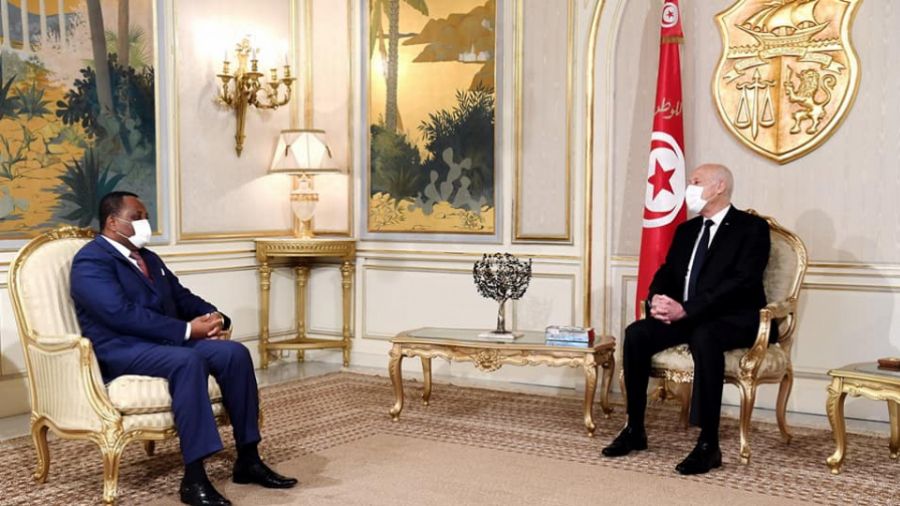 Partagez1
Tweetez
Partagez
+1
1 Partages
The President of the Republic, Kais Saied welcomed the Minister of Foreign Affairs of the Republic of Congo Jean-Claude Gakosso at Carthage presidential palace.
During this meeting, the Head of State emphasised Tunisia’s aspiration to expand the different areas of collaboration with African countries including the Republic of Congo and to contribute to the founding of new joint solutions with a view to realizing the aspirations of the peoples of the continent.
For his part, the Minister of Foreign Affairs of the Republic of Congo, Jean-Claude Gakosso, communicated to Kais Saied the greetings of his Congolese counterpart, Denis Sassou-Nguesso as well as his wish to strengthen consultations between the two nations on regional and international issues of common interest.
He additionally expressed his country’s will to consolidate and diversify cooperation relations with Tunisia. They further examined the evolution of the situation in Libya and the role of the African Union and African countries, in particular neighbouring countries, in securing the success of the political settlement process in a peaceful framework guaranteeing the security and stability of  Libya.
Partagez1
Tweetez
Partagez
+1
1 Partages

Tunisia-Hammami says this trio was behind the fall of Fakhfakh government
Tunisia-Ghazi Chaouachi: These political parties have destroyed the country
To Top