Raoued municipality announced on Saturday morning the identification of a large quantity of waste imported from abroad considering it includes products of foreign origin not sold in Tunisia.

The waste was dropped on a vacant lot in Oued Khayat region, near a rock quarry.

It  was deserted by strangers under night cover, according to the same source.

An Inquiry has been opened to determine the origin of this waste and the parties involved. 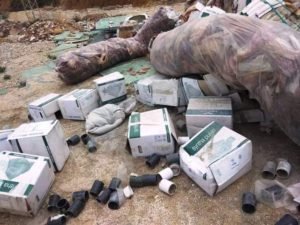