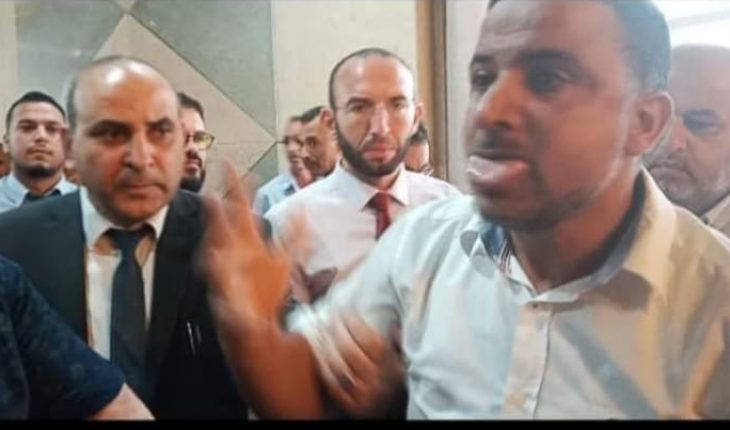 The post of the lawyer who is acknowledged for defending a number of terrorists came after Abir Moussi presence, in a number of media outlets, which were beforehand available to Makhlouf had it not been for his reoccurred attacks on journalists, which made a large number of them decide to boycott him on June 25.

Makhlouf wrote, “This is one of the media machines that the head of the Syndicate of Journalists raced to mobilize in the palace to defend it.
Four complete radio stations under Ben Ali’s garbage alone in only three days … and approximately three hours of broadcasting and during peak times … which only serve a despicable and discarded mass of no more than 217/16 of the true electoral weight of the Tunisian people
Regrettably, the Syndicate of Journalists is about to commit a historical mistake … by arranging itself with the barons of money and the owners of media institutions affiliated with the system that ruined journalists and subdued the Syndicate in the past … and today it is blowing into Ben Ali’s scavenger, believing that it will bring it back to power so that it returns again to impoverish journalists … and domesticate the union “.

Attached to this post is a picture of the Syndicate of Journalists and a number of colleagues, clearly inciting them. 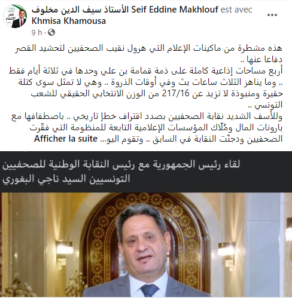 Tunisia-Abir Moussi: Attempts to justify terrorism at the parliament
Tunisia-Three plenary sessions in October to view 11 draft laws
To Top