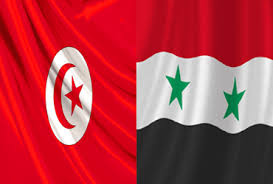 Partagez
Tweetez
Partagez
+1
0 Partages
President Kais Said met with the Syrian Minister of Foreign Affairs and Expatriates Fayçal Al Mokdad on
the sidelines of the 60th-anniversary celebrations of Algeria’s independence,
According to information relayed by the Syrian News Agency, the President of the Republic instructed the Syrian Minister to convey his greetings to Syrian President Bashar Al Assad.
The news agency said that the Tunisian president hailed the achievements of Syria and Tunisia’s fight against the forces of obscurantism which complement each other to achieve the common goals of the two brother peoples.
Partagez
Tweetez
Partagez
+1
0 Partages

Tunisia-President Saïed summons Minister of Transport and Tunisair CEO
Tunisia-Legislative 2019:Exclusion of Ennahdha and Qalb Tounes from Constituencies
To Top