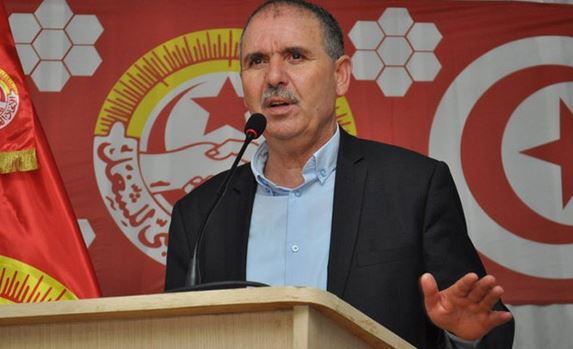 Partagez12
Tweetez
Partagez
+1
12 Partages
The General Secretary of the Tunisian General Labor Union (UGTT), Noureddine Taboubi, said that the decision of the UGTT to stay neutral with regard to the referendum does not mean that the UGTT has given a white card to the President of the Republic, Kais Saied.
Taboubi clarified, in an interview with “Al Sharq TV”, that the UGTT is “for a change”, underscoring the necessity to ensure a “balance of powers”. The secretary general of the UGTT likewise indicated that “the political system must evolve towards a presidential system”, clarifying that the 2014 Constitution contains contradictions because give the President of the Republic, elected directly by the people, only limited powers, while it allows , in return, a deputy, elected with only 280 votes, to appoint and govern.
Partagez12
Tweetez
Partagez
+1
12 Partages

Tunisia-Noureddine Taboubi inaugurates Chokri Belaïd’s statue in Sfax
Tunisia-Abdellatif Mekki: I may be candidate in next presidential elections
To Top