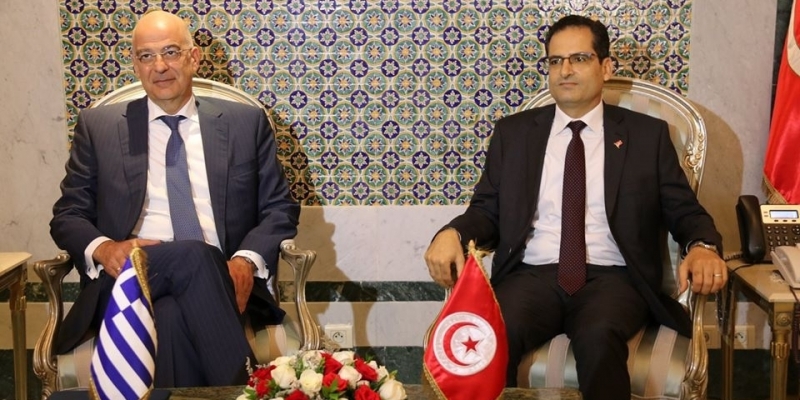 Foreign Minister Noureddine Erray met Monday in Tunis, with his Greek analogue Nikos Dendias.
During the meeting, the two officials exchanged views on the situation in the region, especially in Libya. They reiterated the stances of Tunisia and Greece which both support a peaceful and consensual Libyan-led resolution.
They revealed their countries’ engagement to international legitimacy and UN resolutions. They also refused any foreign intervention.
Speaking to the press, Dendias stated he matches with his Tunisian counterpart that the resolution to the Libyan crisis demands Libyan leadership without foreign interference or military intervention.
“Tunisia is fitted of playing a vital role in settling the Libyan crisis and in the region as a whole,” he pointed out.
Greece is committed to operating within the framework of international law and to the recommendations of the Berlin Conference, Dendias indicated.
“Turkey’s interference in Libya is against the UN solution and could endanger the region’s stability,” he affirmed.
The Greek Foreign Minister pointed out that he talked with Erray several regional issues as well as Tunisia’s connection with the European Union.
He communicated his country’s willingness to support Tunisia so as it overcomes its economic and development hurdles.
Dendias spoke of Tunisia’s victory in containing the COVID-19 pandemic, calling for developing bilateral Tunisian-Greek relations in the political and economic fields.
Erray announced that his meeting with Dendias reviewed regional and international issues of mutual interest, essentially the Libyan crisis.
The two officials also viewed at ways to raise cooperation in the Mediterranean, especially between Tunisia and the EU.
Regarding the Libyan crisis, Erray restated Tunisia’s consistent position regarding its commitment to international law and for a peaceful and consensual solution among Libyans.
“Tunisia refuses any foreign interference or military solution in Libya. We are coordinating with international parties intervening in the crisis as well as neighbouring countries, specifically Algeria, to achieve the expected goals,” he asserted.
Erray said that Tunisia continues to be in touch with the Government of National Accord and with the various political institutions stated in the UN resolutions on international legality.
The minister called on all political parties in Libya to display restraint and favour dialogue to preserve the Mediterranean region and make it a secure zone of exchange and shared living.
“As a non-permanent member of the Security Council, Tunisia is determined to make Libya’s crisis settlement on the list of its top priorities during its mandate,” Erray stressed.
Both ministers emphasised the necessity to develop economic and trade relations. The signing of the Tunisian-Greek agreement on sea transport cooperation is meant to boost trade, especially of products for exporters and businessmen.
Erray and Dendias urged accelerating the meeting of this year’s bilateral events, particularly the 11th Tunisia-Greece Joint Commission and preparations to organise the fourth session of political consultations between the two countries.