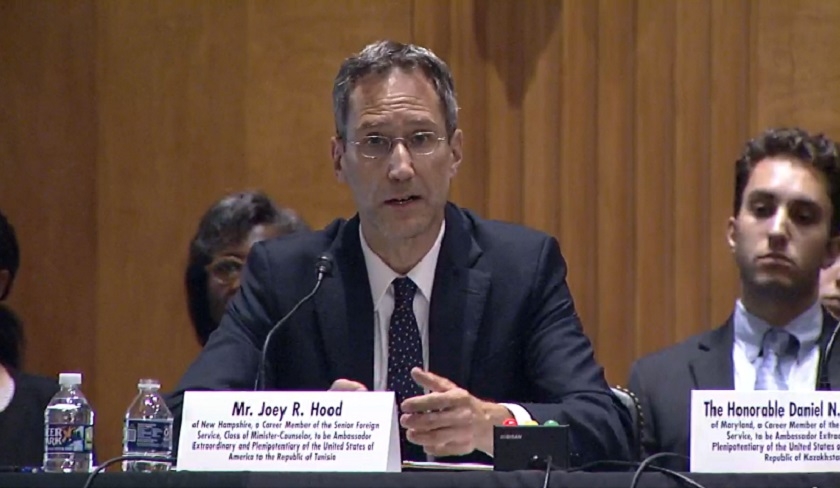 During an intervention before the Senate Foreign Relations Committee, yesterday Wednesday, July 27, 2022, Nominee to be U.S. Ambassador to Tunisia  Joey R. Hood noted, among other subjects, the political situation in Tunisia, following the referendum which has just taken place.

In his testimony, Joey R. Hood said “if confirmed, my most important priority as ambassador would be the safety and security of Americans living in and visiting Tunisia. My next priority would be to help put Tunisia on a more stable and prosperous trajectory. A long-standing U.S. partner and major non-NATO Ally, Tunisia now finds itself suffering the global repercussions of Putin’s brutal aggression in Ukraine, grappling with rising food insecurity and spiking energy prices. Putin’s war of choice has exacerbated Tunisia’s economic crisis, and quick action is needed to reverse this trajectory.”
He added “If confirmed, I would promote a vision of inclusive and open economic growth. The government is negotiating an agreement with the IMF, and this could be a step toward reforms that would benefit all Tunisians. Tunisia could also improve its investment in climate by focusing on infrastructure, and secure technology. If confirmed, I would advocate for U.S. companies to help provide these. As Tunisians grapple with these economic challenges, they have experienced an alarming erosion of democratic norms and fundamental freedoms over the past year, reversing many hard-fought gains since they overthrew a dictator in 2011. President Kais Saied’s actions over the past year to suspend democratic governance and consolidate executive power have raised serious questions. The United States, both on our own and in coordination with our Group of Seven partners, has advocated for a swift return to democratic governance. We have urged an inclusive democratic reform process, emphasized continued protection of fundamental freedoms, insisted on respect for judicial independence and rule of law”.
“I would continue this engagement, if confirmed, and encourage Tunisia’s leaders to rapidly reestablish a democratic government accountable to their people. Tunisians have made clear that their demands for greater economic prosperity must not come at the expense of their hard-won democracy or human rights. I agree with that and ascribe to the Administration’s view that the U.S.-Tunisia bilateral relationship is strongest when there is a shared commitment to democratic values, human rights, and fundamental freedoms. We continue to review our assistance programs to ensure they align with our policy goals and delivery value to the American taxpayer while preserving our long-term partnership and progress made through our past assistance to Tunisia. If confirmed, I would use all tools of U.S. influence to advocate for a return to democratic governance and mitigate Tunisians’ suffering from Putin’s devastating war, economic mismanagement, and political upheaval”.
“Tunisian leaders’ recognition that a vibrant civil society is a partner, not an adversary, has been a key reason for its democratic success. Civil society has demonstrated dynamism and resiliency in representing the aims and demands of the Tunisian people. If confirmed, I would continue to support civil society and engage regularly with the government to protect fundamental freedoms. I would also urge that political reforms and parliamentary elections announced for later this year are transparent and inclusive. Amid this political upheaval, I understand that the Tunisian military has remained an apolitical and professional force that reports to civilian leaders. If confirmed, I would work to ensure this remains the case, and look for new avenues of collaboration on U.S. security priorities, particularly against global terrorist threats, while further strengthening human rights protections. The normalization of relations with Israel, including through the historic Abraham Accords, has led to greater peace and security in the region and deepened opportunities for expanded economic growth and productivity. If confirmed, I would support further efforts to normalize diplomatic and economic relations with the State of Israel in the region,”he concluded.
Partagez15
Tweetez
Partagez
+1
15 Partages

Tunisia- Dismissal within ISIE
Tunisia-Siliana: 90%of fire at Mount Bayadh under control
To Top