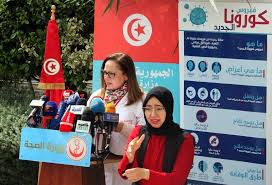 Having transpired through a number of developments in recent days, the Ministry of Health appears to have wiped out the old communications strategy approved at the start of the Covid-19 crisis.

Indeed, the appointment of Fawzi Mehdi as minister of health and the promotion of Nissaf ben Alaya to that of spokesperson, do not look to have been without outcomes on the management of the health crisis, particularly in terms of communication.

The first paradox seen, for this purpose, relates to the health watch bulletin, in principle, published every day by the supervisory ministry.

For some time now, it has been observed that this information no longer enjoys the same importance that was accorded to it at the start of the crisis.

With several bulletins published at late hours of the night and the passage of 48 hours without any bulletin being published, it would be legitimate to ask ourselves the question: What is happening at the Ministry of Health?

The appointment of Nissaf Ben Alaya to the post of spokesperson: was it Judicious?

The first hypothesis that seems defensible would be that the many changes that have occurred in recent times within the ministry have affected the quality of work, especially in terms of communication.

Certainly, the appointment of Nissaf Ben Alaya as a spokesperson is a deserved promotion. However, the question which arises is: would it not be more useful in a more technical position?

Indeed, as Director-General of the National Observatory for New and Emerging Diseases, the doctor was at the forefront of the country’s fight against the pandemic. By becoming a spokesperson, she will be in charge of administrative tasks which will take her time and energy.

Has the Ministry of Health changed its strategy?

The second hypothesis relates to a possible change in the ministry’s communication strategy.

Let us remember that during the last press conference organized by the ministry, Faouzi Mehdi considered that one should not “frighten the Tunisians”.

He stressed, in this sense, that “all people affected by Covid-19 are not necessarily placed in intensive care”, saying that such a procedure is reserved for the most serious cases.

It is, therefore, possible that the ministry seeks to “alleviate” the interest that citizens have in the matter by avoiding “a hype” of information.

Also, it should be remembered that lockdown as a preventive measure, was officially abandoned, even before the appointment of the new minister, given its harmful economic impact.

This media blackout would perhaps aim to avoid exposing too much of the epidemic rebound that the country is experiencing at the moment so that the coexistence with the virus is not rejected by the people.