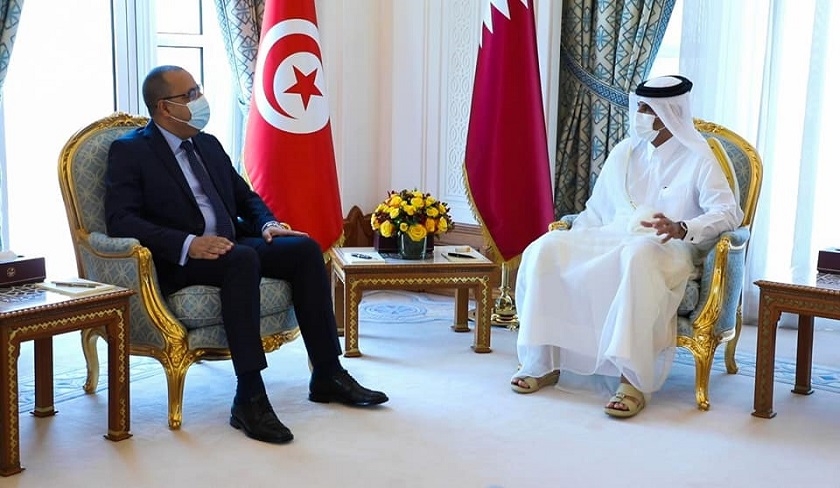 Prime minister Hichem Mechichi met this Sunday, May 30, 2021, in Doha, Minister of the Interior and prime minister Sheikh Khaled Ben Khalifa Ben Abdelaziz Al Thani, as part of his visit to Qatar.

During this meeting, the PM emphasised the importance of fraternal relationships between the two nations and the necessity to consolidate them in various areas, calling for work to increase and diversify Qatari investments in Tunisia.

For his part, Qatar’s Prime Minister reaffirmed his country continuing support for Tunisia to surmount its economic difficulties, in particular, with the negative consequences of the Covid-19 pandemic.

He further praised Tunisia’s success in various fields, particularly concerning vocational training. In this context, he stated his country’s desire to draw more Tunisian skills in several sectors such as tourism, medicine, engineering and ICT, particularly with the approach of the 2022 world.

The presidency of the government specified that this meeting took place in the presence of the Secretary-General of the Government Walid Dhahbi, the Minister of Finance Ali Kooli, the Minister to the Head of Government in charge of relations with the parliament, Ali Hafsi and the Tunisian Ambassador to Qatar, Sami Saïdi. On the Qatari side, were present, among others, the Minister of Trade and Industry, Ali Ben Ahmed Al Kuwari, the Minister of Foreign Affairs Sultane Ben Saâd Al Marrikhi, the Ambassador of Qatar in Tunisia, Saâd Ben Nasser Al Hamidi.