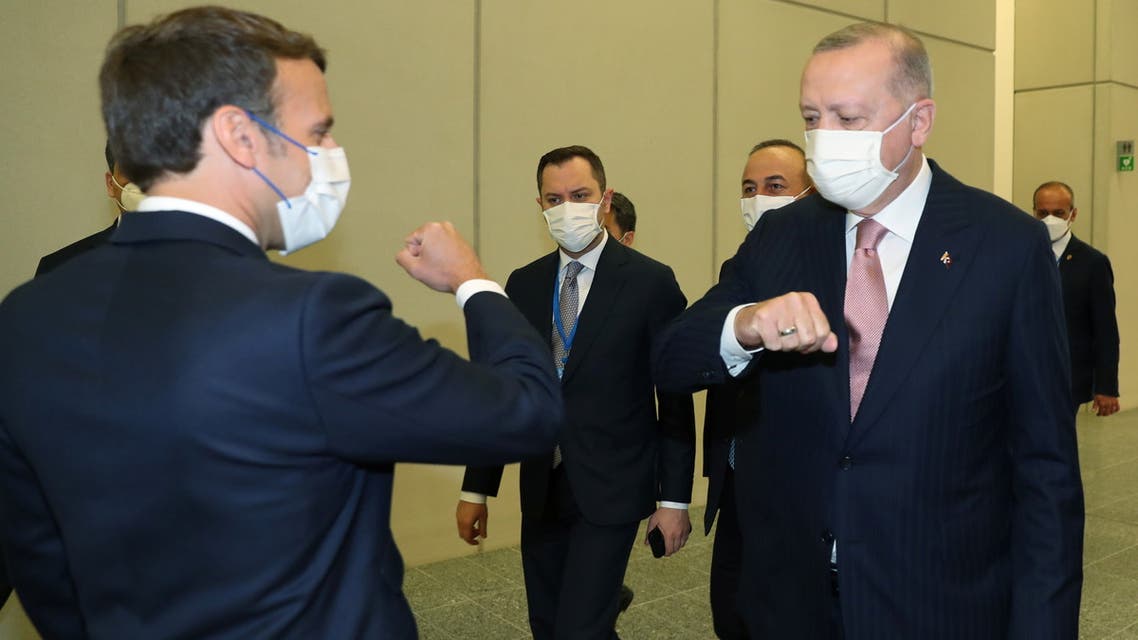 A “verbal ceasefire” is in place between France and Turkey after months of rancorous exchanges that strained the relations of the NATO allies, the French foreign minister said Friday.

Turkish President Recep Tayyip Erdogan and his French counterpart Emmanuel Macron met on the sidelines of the NATO summit this week, following the rows on international crises such as Libya, Syria and Nagorno-Karabakh that led to bitter personal diatribes from the Turkish leader.

Foreign Minister Jean-Yves Le Drian told BFM television that he welcomed the change in tone but said it had to be matched by more concrete steps from Ankara.

“There is a kind of verbal ceasefire. That’s good but it’s not enough,” he said.

“The verbal ceasefire does not mean acts, and we expect Turkey to act on sensitive subjects,” he said, citing Libya, Syria and also the Eastern Mediterranean, where France has backed EU members Greece and Cyprus angry over Turkish advances in the waters.

Le Drian also said France was particularly eager to work with Turkey over Libya, where Ankara sent troops backed by thousands of Syrian militia forces to bolster the UN-backed government.

“We will see if President Erdogan has changed more than just his words but also his actions,” Le Drian said.

Macron warned earlier this year that Turkey would try to meddle in France’s 2022 presidential election.

Turkish President Tayyip Erdogan meets with his French counterpart Emmanuel Macron during a bilateral meeting, on the sidelines of the NATO summit, in Brussels, Belgium June 14, 2021. (Reuters)

He has suggested that Ankara’s unilateral moves on the international stage and its purchase of S-400 air defense missile systems from Russia have contributed to a “brain death” of NATO, where Turkey is a key member.

A new law against extremism the French government introduced after a series of attacks also aroused Erdogan’s ire, with the Turkish leader accusing France of Islamophobia.

Erdogan last year said Macron needed “mental checks” and expressed hope that France would “get rid of” Macron as soon as possible.

But there have been tentative signs of easing tensions in recent months, with Erdogan keen to strengthen links with Turkey’s Western partners at a time of growing economic difficulties at home compounded by the Covid-19 pandemic.

In another sign of warming ties, France this week removed Turkey from its red list of countries off-limits for non-essential travel, effectively allowing fully vaccinated French tourists to holiday there.

At the NATO summit in Brussels, Erdogan also held his first talks with Joe Biden as US leader, though he indicated no plans to abandon the deployment of the Russian S-400 missiles.