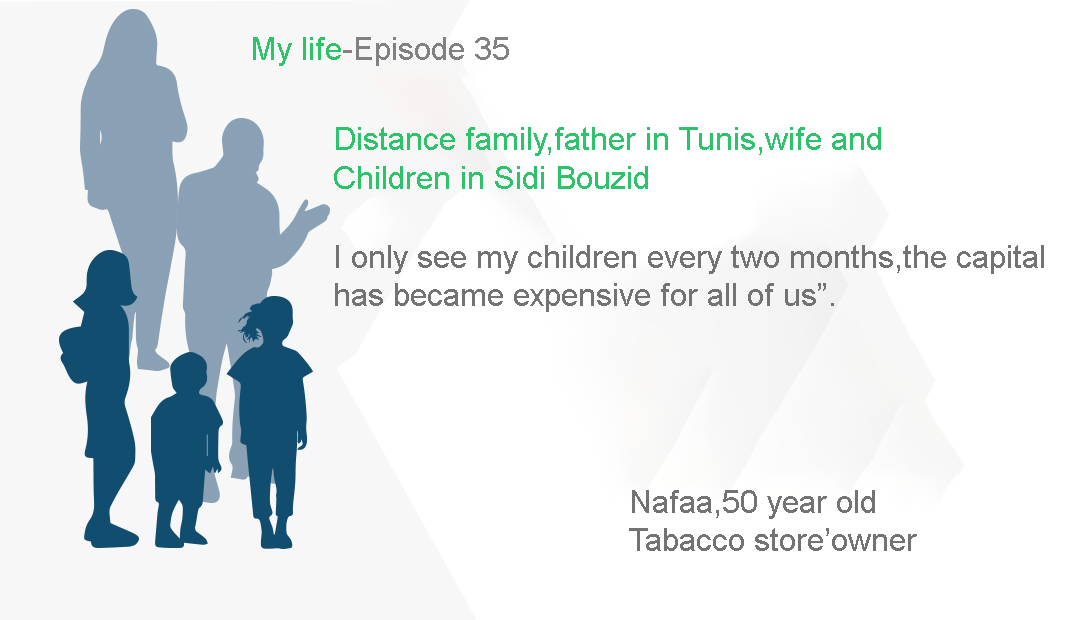 Tunisie Numérique has conducted a series of interviews with Tunisian families to find out how they handle their budgets in these times of crisis that the country is going through.

These Tunisians come from various social classes, of different ages, and live in both posh and popular neighborhoods. They voluntarily consented to answer in a spontaneous and anonymous manner to the questions of Tunisie Numérique. The stories have been transcribed as they are.

50 -year -old husband, owner of a tobacco store in one of the popular districts of Tunis.

The woman, Souad, 35 years old, tailor and owner of a wedding dresses rental store in Jelma from the governorate of Sidi Bouzid

The family rents a home in Jelma where Souad lives with her 03 children. Nafaa lives in Tunis, more precisely in his brother’s house in house in the Bab El Fella district.

From Jelma to Tunis then to Jelma

Souad states: “The return to Jelma was not easy, particularly for girls. The poor, could not adapt even after many months of our installation here. My eldest daughter has still not comprehended why she had to abandon her friends and neighbors. She blames me for this radical change, I acknowledge. “

Souad tells us sadly: “I had no choice – ما باليد حيلة. Life has become impossible in the capital … here at least: the school is near and I do not require means of transport to do my shopping. “

Nafaa tells us that he is in Jelma for a few days.

He drops a long sigh and speaks to us: “I only see my children every 02 months … The capital has become excessively expensive for all of us and we had to decide: either come back all here and remain unemployed or separate ourselves. Several of my friends from Sidi Bouzid have made the same choice with families at a distance. ”

Nafaa tells us that he too is from one of Jelma’s delegations. He stopped his studies prematurely and joined his brothers in the capital.

He tells us about it: “Immediately established in the capital, I began working with my brother. The latter had a shop نصبة of household appliances at the Souk de Moncef Bey. I fast picked up the departure capital required to open a store at the Souk too. My brother guaranteed the suppliers and my business was working well. “

Nafaa suddenly stops speaking, his face tense. He apologizes and says “Hamdoullah ya rabbi” looking at the sky. He resumed: “Before the revolution everything was fine. I made enough money to support my needs. After the revolution, the situation began to decline . In 2016 it was the blow of the mass الضربة القاضية. The fire of 6 years ago destroyed everything. The flames ravaged all my goods. Everything went up in smoke. I had no insurance. My brother likewise lost everything. It was the return to the starting box. We had to start from scratch! ».

Nafaa turns around, looks at his wife tenderly, and said to us, “It was she who was there and supported me when everyone dropped me. My wife’s family supported me financially, I am grateful to them. “

Souad =tells us: “I met Nafaa when I was in the first year of faculty. I decided to get married and abandoned my studies. I only had my first daughter after 3 years of marriage. We lived well at the beginning and we had no money problems. Nafaa operated well and was known in Moncef Bey. The more the family was growing, the more challenging it was, until 2016. I will never forget this evening. We lost everything ”.

Souad continues: “I decided to help Nafaa, I followed a sewing and modeling training in a private center. My sister funded my training, she bought me a sewing machine, and fabric and I launched my little project. I made home dresses ”.

Souad tells us about her project: “When I returned to Jelma, my parents supported me launch my dress rental store. I likewise opened a couture and retouching mini-workshop for ready-to-wear stores in the region. “

Souad confides to us: “I am anxious about the future of my children, they have to succeed in their studies. Life has become too expensive. Prices are flying and my income does not improve. I work more and I earn less. It’s crazy ! ».

The couple does not have a car and uses public transport for travel and races. The family has no social security coverage. Nafaa and Souad share family expenses.

Before the “separation” the family went to the beach. Nafaa tells us: “We went to La Goulette or La Marsa. We took the TGM it didn’t cost us. My children have not visited the beach this year. We couldn’t afford it. We didn’t have enough money. “

Nafaa does not have a set monthly income. he earns an average of 800 dinars per month.

Souad for her part tells us to make everything to generate a net profit, all paid costs, of 300 dinars per month.

Nafaa tells us they spare the year for the Eid Kebir budget and be able to purchase a sheep at 400 dinars.

The couple does not have a bank or postal account.

My life: family in Sfax with autistic twins
MEGARA Challenges 2022: Issues and challenges of the circular economy in Tunisia, the MENA Region and Africa
To Top