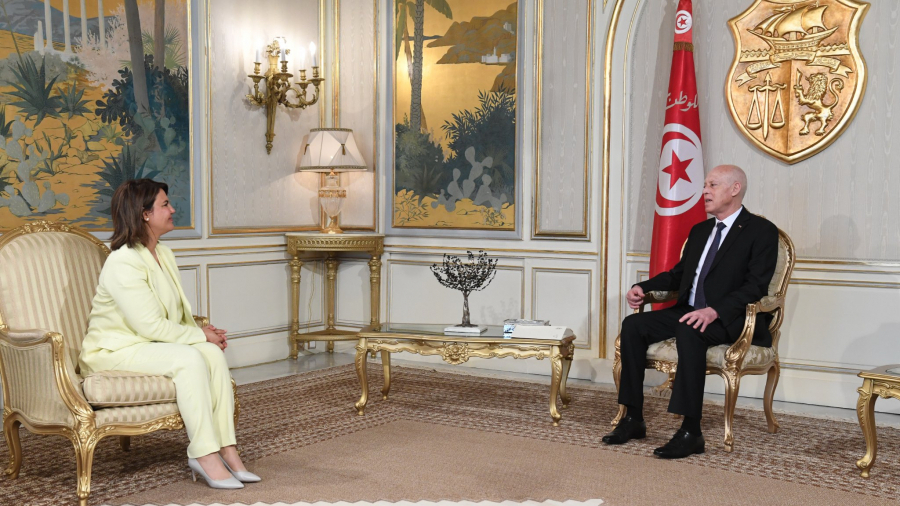 The President of the Republic, Kaïs Saïed, welcomed, this Friday, at Carthage Palace, Libyan Minister of Foreign Affairs and International Cooperation in the Government of National Unity, Najla Mankouch.

The Head of State, on this occasion, underlined that Tunisia respects the choices of the Libyan people who according to him possess all the required assets to unblock the delicate situation in which Libya finds itself. Tunisia refuses any attempt to divide Libya, he said, recollecting that it is always ready to back the efforts of the Libyan people to achieve a lasting political settlement.

For her part, the Libyan minister examined the latest developments in the situation in Libya and the efforts made to launch “an actual inclusive dialogue, capable of safeguarding Libya from potential fragmentation or foreign interference”.

She affirmed that President Saïed supports the efforts made by the Government of the National Union to organize a double parliamentary and presidential election. Mankouch voiced her gratitude to Tunisia for the active role it is playing in favour of a peaceful settlement of the crisis in Libya. For her, the efforts made by Tunisia in this direction mirror the distinguished level of the ties of brotherhood that unite the two nations as well as the historical values ​​shared by the two brotherly peoples.

Tunisia-Bochra Belhadj Hmida: Saïed is solely accountable for the safety and dignity of all women in Tunisia, not just his wife and relatives [Video]
Tunisia-UGTT: Fake news that could threaten the stability of the country
To Top