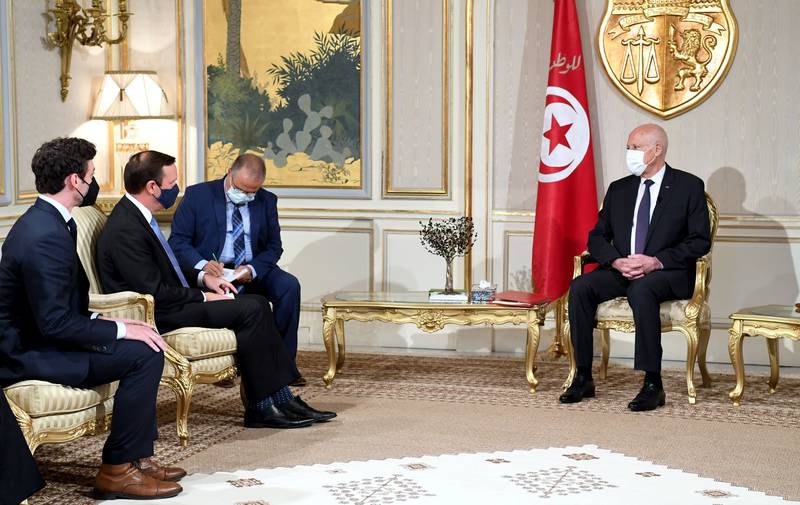 A group of key US senators are floating the possibility of aid cuts to Tunisia and an assistance package for Lebanon, marking a potentially significant reversal of fortunes on Capitol Hill for both countries.

Democrat Chris Murphy threatened to cut Tunisian aid over President Kais Saied’s failure to form a new government following his freezing of Parliament, while another senator raised the possibility of a “mini Marshall Plan” for Lebanon after meeting with Prime Minister Najib Mikati.

Mr Murphy, the head of the Senate’s Middle East panel, and three other Democrats have recently returned from a congressional visit to Tunisia, Lebanon, Israel, the West Bank and Greece.
Tunisia quickly became a regional favourite among the purse-string holders in Congress following its 2011 democratic revolution, and members have happily lavished millions of dollars in US assistance on the tiny North African country every year since.

The House of Representatives granted the Biden administration’s request for $197 million in Tunisian aid when it passed its foreign aid bill in July. But that vote occurred a mere two days after Mr Saied froze the Tunisian Parliament, and the full legislative text had been drafted weeks before that.

Since then, the US has continued to lose patience as Mr Saied consolidates power by decree.

The White House sent a delegation of senior officials to Tunisia to relay a message to Mr Saied from President Joe Biden saying that he must appoint a prime minister-designate — something the Tunisian president has so far refused to do.
The Senate is expected to release and vote on its own version of the foreign aid bill in the coming weeks, giving Mr Murphy ample opportunity to convince his colleagues in both chambers to cut Tunisian aid unless Mr Saied appoints a prime minister-designate.

Democrat Richard Blumenthal, who joined Mr Murphy in Lebanon, raised the prospect of a badly needed Lebanese aid package during the press call.

“I wouldn’t discount or dismiss the idea of a mini Marshall Plan for Lebanon because our security interests depend on it,” said Mr Blumenthal, referring to the US foreign aid initiative for western European countries following the Second World War.

David Hale, a US diplomat and former ambassador to Lebanon, indicated in May that the State Department is also working on a foreign assistance package for Beirut.

Pro-Israel hardliners in Congress have repeatedly criticised US support for the Lebanese Armed Forces, and members across the ideological spectrum have expressed frustration over Lebanon’s failure to form a government for more than a year after the Beirut port blast.

That failure has exacerbated Lebanon’s economic crisis, preventing Beirut from enacting the reforms necessary to unlock desperately needed cash from institutions such as the International Monetary Fund and the World Bank.
Health Minister Firass Abiad, a gastrointestinal surgeon, is the chairman of the board of directors of Lebanon’s largest hospital, the Rafik Hariri Hospital. Photo: NNA

In the meantime, the prices of consumer goods, food and fuel continue to skyrocket amid rapid inflation, fuelling popular unrest against the Lebanese political elite.

Mr Murphy noted that the senators observed “lines for gas stretched around city blocks” while driving through Beirut.

The senators criticised Iran’s circumvention of the Lebanese caretaker government through the delivery of two ships full of fuel to the paramilitary group Hezbollah, with Democrat Chris Van Hollen deriding it as a “PR stunt”.

However, they endorsed a proposal under discussion between Lebanon, Syria, Jordan and Egypt to ease the fuel crisis, despite continuing US sanctions on Damascus.

“We look forward to working with the Biden administration on this alternative of power from Egypt to Jordan and Syria into Lebanon,” said Mr Van Hollen. “That does require a waiver or some other issue to address the [Syria sanctions] provisions.”

The currency crisis has also placed the Lebanese Armed Forces in dire financial straits. It will need as much as $100m in additional cash over the next year to pay its soldiers’ salaries. Enlisted Lebanese soldiers are currently living on less than $90 a month.

Mr Biden issued a memorandum on Tuesday aimed at providing $47m in aid to the Lebanese Armed Forces in the hopes of freeing up cash to pay soldiers’ salaries.

Still, it remains to be seen whether the new Lebanese government will be able to rein in the rampant corruption in the country, another major drag on the spiralling economy.

Tunisia-President Saïed: Tunisia’s sovereignty has never been a subject of debate
Tunisia – Ennahdha categorically refuses any violation of the constitution
To Top