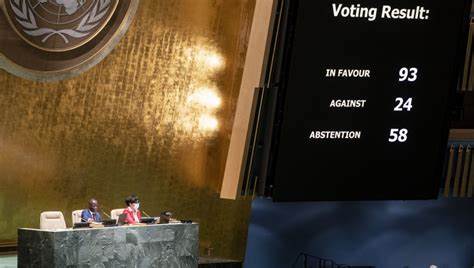 The United Nations General Assembly voted Thursday to suspend Russia from the UN Human Rights Council after high-profile allegations of atrocities perpetrated by Russian soldiers during the war in Ukraine.

The voting result was 93 in favor, 24 against and 58 abstentions.
Since the decision was supported by 93 delegations, which is more than the two-thirds majority of the decision needed to adopt the resolution, the General Assembly passed it. However, the suspension will remain in place until 2023, which will permit Moscow to seek admission again next year.
Partagez16
Tweetez
Partagez
+1
16 Partages