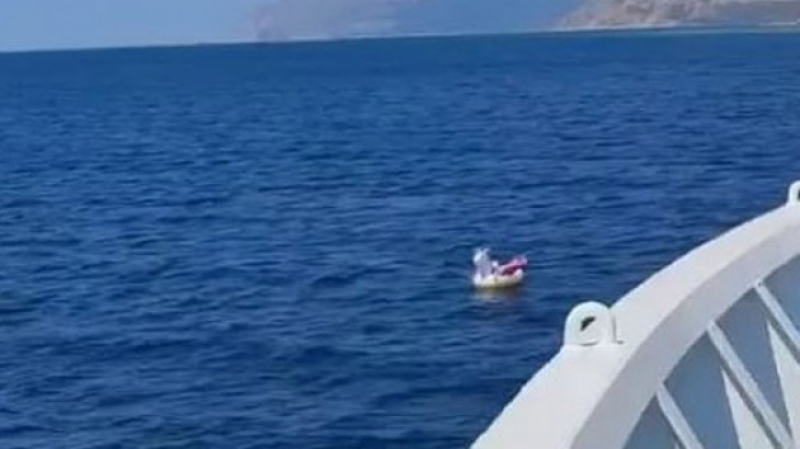 The incident took place in the sea area off the town of Antirrio in the Gulf of Corith.

It occurred around noon on Monday when the girl between 4 and 5 years had reportedly “escaped her parents’ attention” and was swept away from the shore on a unicorn buoy.

When the parents realised that their little daughter was out of sight, they informed the port authorities who alerted the captain of the local ferry “Salaminomachos.”

The nearest ship hurried to save the four-year-old girl.

“I was approaching the port of Antirrio and I was notified by the Port Authority that a child, who I did not expect to be so small, had been swept away by the currents on a nearby beach, which is near the port pier,” said the heroic captain Grigoris Karnesis.

After spotting her on the inflatable unicorn, he carefully rescued her.

“The little one was not cool, she was frozen from her fear, because the current was very strong. I put the ship in such a position so as not to affect the small buoy, I placed it in such a way that the ship was not affected by ripples, because if the buoy sank we would have serious problems. We approached it slowly and we were able to rescue the child,” he continued.

According to the captain the little girl was very scared. She did not speak at all, but cried perhaps out of despair, when she saw the big ship approaching her.

The crew on the ship made faces and jokes in order to relax and calm her before she was reunited with her family.

The little swimmer was more than 500 meters away from the shore.