Partagez2
Tweetez
Partagez
+1
2 Partages
Tunisair former CEO Olfa Hamdi commented on her dismissal decision in a post published today on her official page.
“I was going to declare today at the press conference the rescue plan of the Tunisair airline, following the government’s rejection to rescue the company,” she announced. Hamdi announced that she contacted the Minister of Transport, Moez Chakchouk, to check the information circulating about her dismissal.
According to her, Chakchouk reassured her that she was still the CEO of Tunisair. “Mr Minister, transparency is a principle enshrined in Articles 10 and 15 of the Constitution. Consequently, sooner or later I will enlighten public opinion on this matter… The current system is a cemetery for young people and women, ”she added. 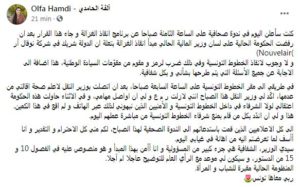