This barometer is based on a self-administered online survey that took place from February 17 to 24, 2020. Its goal is to assess the satisfaction of Tunisian Internet users with the performance of the 3 presidents: Kaïs Saïed, Rached Ghannouchi and Hichem Mechichi.

It should be remembered that during the eighth wave of the barometer, respondents’ satisfaction with each of the three presidents was as follows.

For this tenth wave, the sample size after the screening is 2086 respondents. 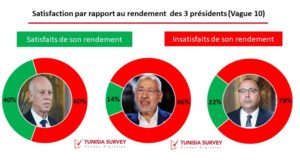 The Speaker of the Assembly of the Representatives of the People Rached Ghannouchi is unpopular as ever and fails to raise the bar. After ten successive waves, his unpopularity has not changed significantly.

Despite acquiring three points in comparison to the ninth. 89% of the respondents remain dissatisfied with his performance. 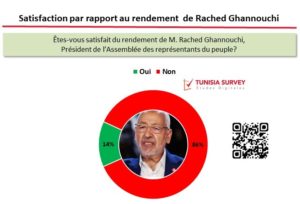 In comparison to the two other presidents, For this tenth wave, Kais Saied is the most popular president.
40% of respondents are satisfied with its performance as opposed to 27% during the 9th wave. He, therefore, gained 13 popularity points and quickly stood out from the unpopular peloton. 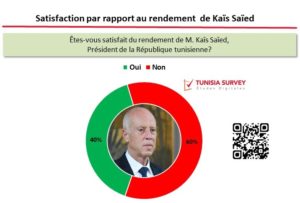 Hichem Mechichi’s popularity has scored its lowest level since joining the Barometer of the 7th wave. 78% of respondents are dissatisfied with his performance against 68% in 9th wave 9, a decline of 10 points in popularity.
With the 4th wave 4, the prime minister has lost 38 popularity points and is growing closer and closer to the unpopularity rating of Rached Ghannouchi. For this tenth wave, Hichem Mechichi is the single one of the 3 presidents to lose popularity points. 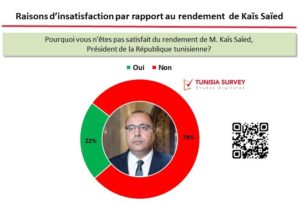 The principal reasons for dissatisfaction are the lack of confidence and program:

For Rached Ghannouchi: 79% are dissatisfied  because they do not trust him. A trend that has been maintained since the third wave. 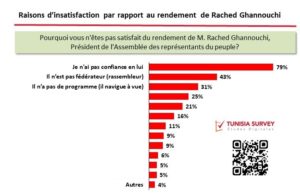 For Kaïs Saïed: 63% of those dissatisfied are so because he has no program (he is flying blind). 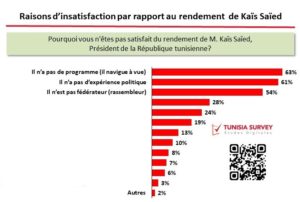 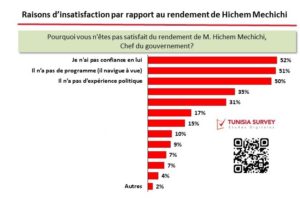 Tunisia-Mohamed Ammar: It would be normal for the President of the Republic to set an example
Tunisia-Beja: Hichem Mechichi visit stirs the dissatisfaction of citizens
To Top