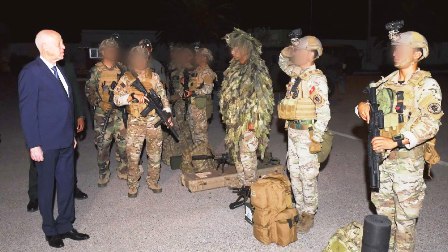 The President of the Republic, Kaïs Saïed paid, an unannounced visit, Saturday, May 1, 2021, to Kasserine where he broke his fast with military units in the closed area of ​​Jebel Châambi.

The Head of State emphasised on this occasion being the supreme head of the armed, military and security forces, asserting that the dangers endangering the country do not significantly come from terrorist operations but also from tries to divide the State undercover of interpretations of the constitution which take the form of interpretations but are basically as terrorist as “those who shelter in the mountains and those who command them”.

Kaïs Saïed declared that no one is above the law and that those who break it will have the punishment of justice, of the people and history, revealing to have chosen the day of the Labor Day and a day of Ramadan to make this visit to confirm that he is taking the path of the people in an approach to building a new history far from the calculations that are being done daily.