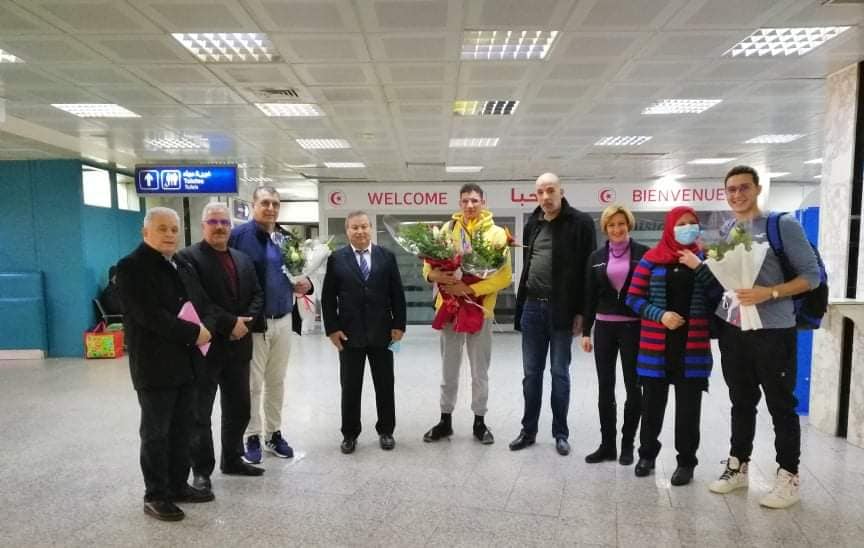 Arrived at Tunis Carthage airport, Tunisian Olympic champion Ahmed Ayoub Hafnaoui, silver medalist in the 1500 meters freestyle in Abu Dhabi, was welcomed by the Tunisian director general of sports, Moncef Chalghaf, and the president of the Tunisian federation of swimming, Hedi Ben Hassan, as well as several officials of the Tunisian Ministry of Youth and Sports.

This reception at the airport likewise took place in the presence of some representatives of the Tunisian Olympic Committee. Hafnaoui said: “I am glad to get a silver medal at the world championships and to break the African record”. Concerning the course of the race, he stressed that “the race was extremely difficult, and the German competitor inflicted a high order, and his world record is confirmation of that. I finished the competition in second place, and I’m happy to have granted Tunisia a medal on this world date. God willing, I will make other achievements at the following international competitions and important dates ”.

Echoes CAN 2021: Samuel Eto’o tackles Europe, an opponent Tunisia will be missing
National Team: Chikhaoui and Ben Youssef the big absent from the CAN!
To Top